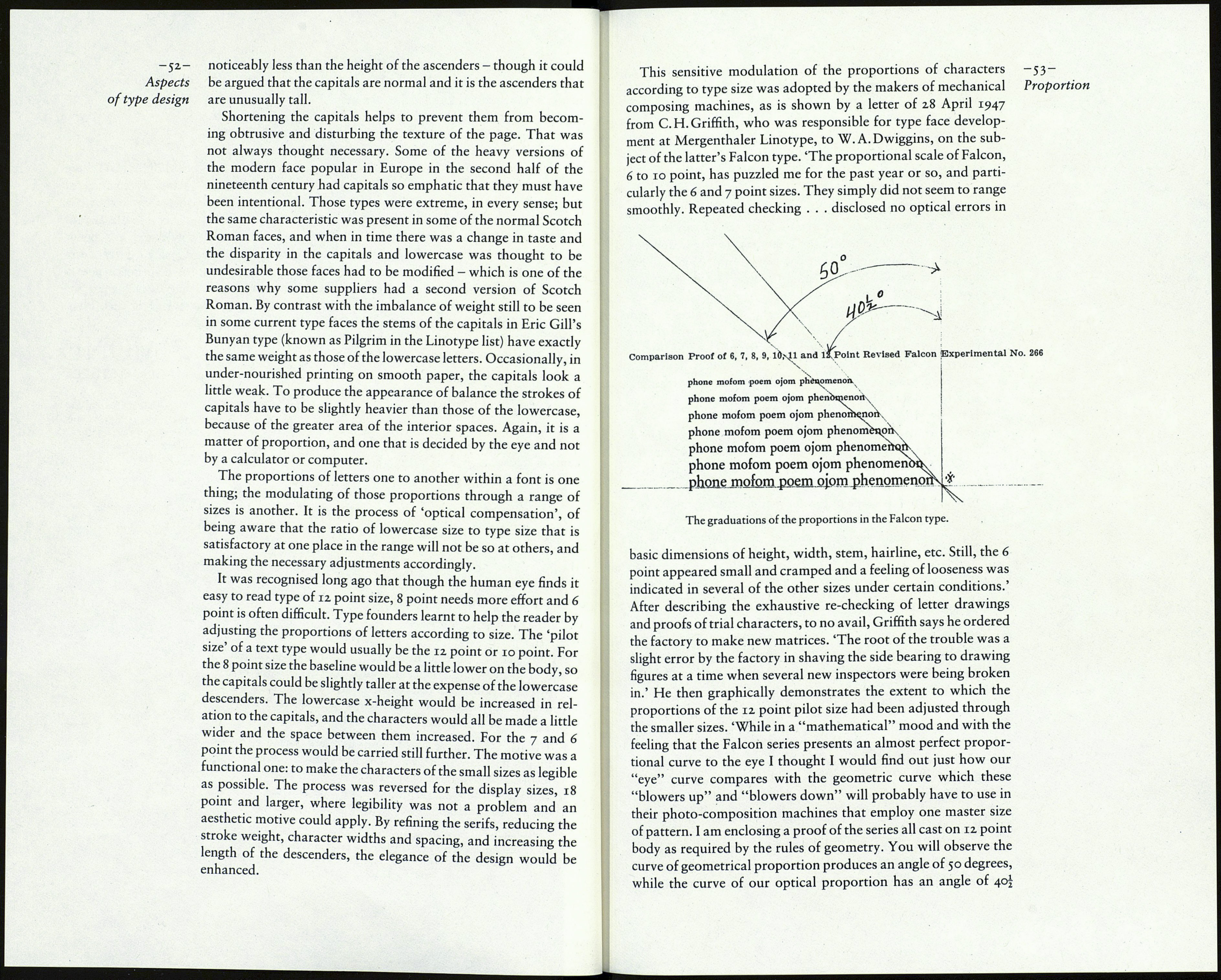 -50- decision being made, the baseline became a permanent and un-
Aspects changeable feature of the system; it is common to all type faces
of type design supplied by that manufacturer, and all functions, such as the
placement of sized-down font numerals in the role of superior
figures, are measured from it. With their considerable library of
existing letter drawings to call upon Linotype chose to use their
traditional standard alignments of the hot-metal era: 8,12 and 18
point alignments where an existing type was available in display
as well as text sizes. New designs were made to the standard 12
point alignment only, whatever range of sizes it was to be used in
- a doubtful practice. Other manufacturers made choices to suit
themselves - some of them to unfortunate effect on the propor¬
tions of their types, to judge from the evidence to be seen too
often on the booksellers' shelves.

The length of the descenders is only one aspect of the proportions
of a type design and, in regard to readability, not the most im¬
portant. If the descenders are short the appearance of the letters
g, j, p, q and y may be displeasing to the professional eye, but the
reader's comprehension of the text will not suffer much. The
case is otherwise with the ascender elements in b, d, h, к and 1
which, if they are shortened, cause the letters to lose some of their
individuality and the words in which they occur to lose some
of their familiar shape. Actually, though, ascenders are seldom
shortened - certainly not when the baseline is fixed. When ascen¬
ders seem to be short it is usually because the x-height is larger
than normal. An extreme example is the Antique Olive sans-
serif type; an attractive face when used in a display line but not
very legible or readable when used in advertising text matter - a
consideration that evidently does not trouble some typographers.
The ratio of x-height to ascender height is an important fac¬
tor in the style, and the quality, of a type. Francis Meynell's
'Nonesuch Plantin', which was Monotype Plantin no with the
ascenders lengthened as well as the descenders, transformed the
type to a remarkable degree, making it look not only more refined
but as if it derived from another period: Fournier's, say, not

It was a delightful occasion, and began one of my most treasured
friendships, which did not end until B.R.'s death in 1957. I
found his personality a complete confirmation of his work as a
typographer. His line of talk was as firmly gende as his drawing of
a border or typeface. He was a propagandist but he was kind; he
admired a great tradition and showed how one could adapt it to
modern use; he treated the young aspirant as a fellow-worker.

The lengthened ascenders and descenders in Monotype Plantin no,

as used in the text of Sir Francis Meynell's autobiography My Lives.

The n point size of Monotype Baskerville was similarly treated.

Granjon's. For my own taste, if x to h is a proportion of about six
to ten a face will look refined and be pleasant to read. If the x-
height is much less than that the face may be stylish but will be
unsuitable for a long text. A larger x-height conduces to dullness.
Small x-height was a characteristic of types produced in the first
quarter of this century; see, for instance, Goudy's Pabst Roman,
the charming Nicolas Cochin, and the popular Astrée of the
1920s. A more notable example is Cheltenham Old Style, the first
size of which, the 11 point, was made in November 1900. The
design is always credited to the architect Bertram Goodhue,
though Ingalls Kimball of the Cheltenham Press may have direct¬
ed it. The insensitive modelling of the face was partly redeemed
by the small x-height, which gave the type a degree of refinement.
The recent large x-height version has eliminated even that small
virtue. It is not the only type of the past to have been tastelessly re-
proportioned by latter-day design studios.

The height of the capitals compared with the lowercase ascen¬
ders is another vertical relationship that has an effect on the
appearance and quality of a type. The accepted opinion now is
that in a type designed for book printing the capitals should be
shorter than the ascenders. The amount of the difference in
height has varied from one face to another. In Poliphilus, Bembo
and Garamond the difference is clearly visible. In eighteenth-
century faces such as Caslon, Fournier and Baskerville the
capitals are nearly as tall as the ascenders. (At Francis Meynell's
request Monotype made shortened capitals for Fournier 185 for
use in the first Nonesuch Shakespeare.) Trump Medieval, a type
of comparatively recent origin, has capitals that are unusually
short - a characteristic favoured in Germany, no doubt, where
the printed language uses capitals very frequently.

In sans-serif types 'short' capitals seldom occur. An interesting
exception is Tempo, the Ludlow design, which was popular in
British newspapers for many years. In the light, medium and bold
versions (but not the heavy weight) the height of the capitals is

The basic character in a type design is determined
by the uniform design characteristics of all letters
in the alphabet. However, this alone does not
determine the standard of the type face and the
quality of composition set with it. The appearance

The basic character in a type design is determined
by the uniform design characteristics of all letters
in the alphabet. However, this alone does not
determine the standard of the type face and the
quality of composition set with it. The appearance

Linotype Ionic was the progenitor of several faces, including

Textype, shown here. The type size is the same, and there is hardly

any change in the size of the capitals. The distinct difference in

appearance is due to the lowercase x-height.

extremely unusual in
that they combine a
noticeable Elegance of
Style and a Superior
Quality. Fifty Years
of Experience goes a
long way toward the
making of such Hats.

The original Cheltenham
Old Style, as shown in the
November 1904 number
of the ATF American
Cbap-Book.