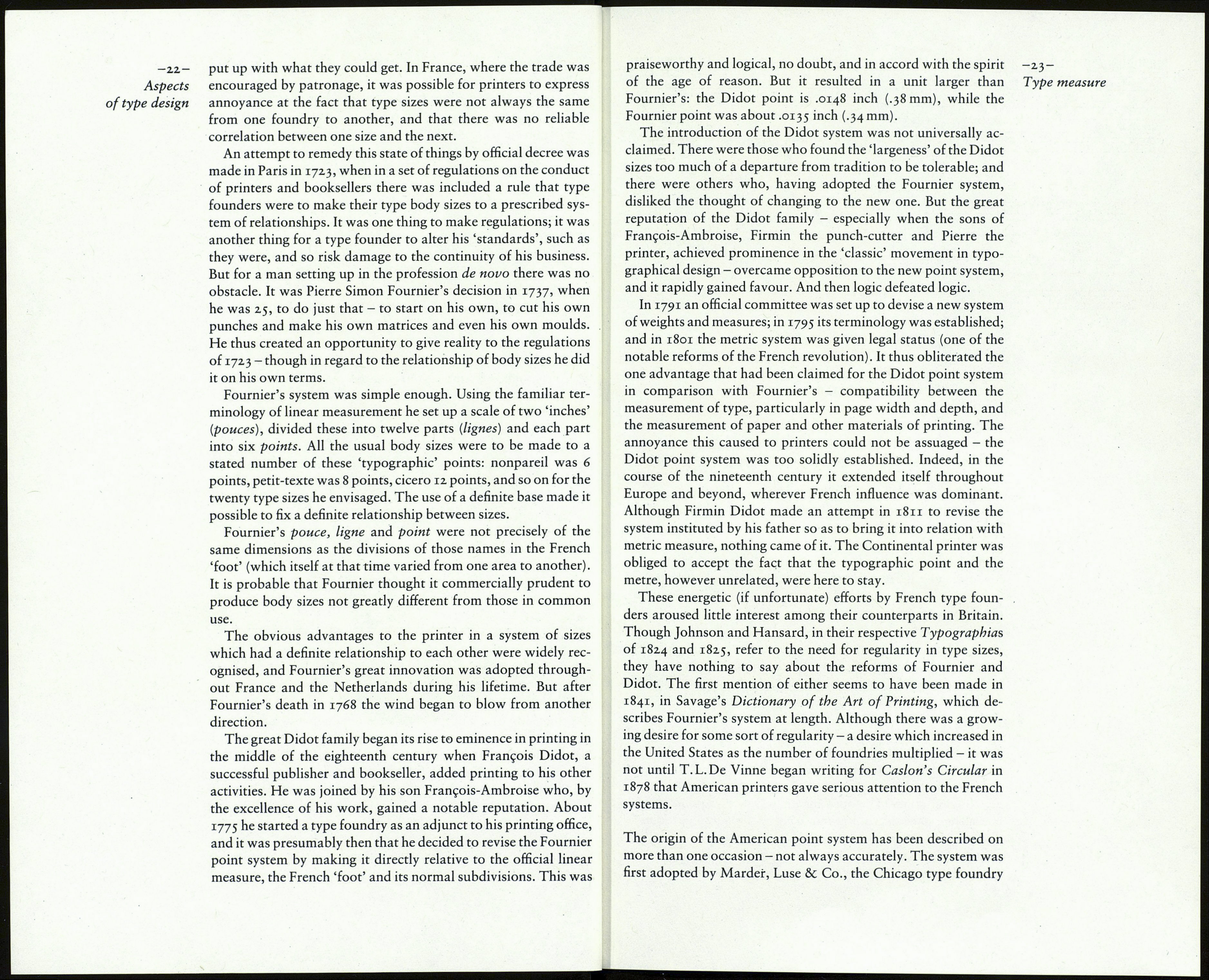 of type design A now frequently ufed—more efpe-
cially for the finer clafs of book work ; as
however the faces which were cut in the
early part of the lait century are now
unpleafing both to the eye of the critic

The modernised old style cut by Alexander Phemister in Edinburgh, i860;
imitated by most British and American type founders.

practice in Britain: to refer to all text faces from those of Aldus
through to the Caslon type as 'old face', and to reserve 'old style'
for the more regulated faces that imitate the Phemister letter. The
American way is more logical: 'old style' for types of the first
group, and 'modernised old style' for the second. The American
convention is used in this book.

Those terms being adopted, it is not surprising that the class of
text face that was so different from the old style, the one that was
created by Firmin Didot in 1784 and developed by his followers,
including Bodoni, should have been called modern; and that the
class that came between the old style and the modern, exempli¬
fied by the types of Fournier and Baskerville, should be called
transitional - though A.F.Johnson thought that 'a vague and
unsatisfactory epithet'.

The names of those basic classes of type were different in conti¬
nental Europe, but equally imprecise and illogical. In France the
equivalent of old style was 'Elzevir' and of modern 'Didot'; there
was a variation of the latter actually called 'Didot type anglais'.
In Germany it was possible to talk of 'moderne Antiqua'. To
eliminate such absurdities and to provide a classification scheme
that was fairly comprehensive Maximilien Vox, the distingu¬
ished French typographer, introduced in 1954 the plan that bears
his name. It comprised nine groups, each with a newly-invented
title. Vox said the names could be changed if people so wished;
the groups were the important thing. The scheme was adopted by
the Association Typographique Internationale and by the British
Standards Institution, which in 1967 recommended the following
list, in which three of Vox's names are retained.

I, Humanist, faces derived from the Jenson type, for
example Centaur and Italian Old Style.

II, Garalde, for faces from Bembo and Garamond through
to Janson and Caslon.

The above two groups cover all the kinds of design otherwise
called 'old style'.

V, Slab-serif in place of 'antique' and 'egyptian'.
VI, Lineal, in place of 'sans-serif; the group divided into
four sections: Grotesque, types of nineteenth-century
origin; Neo-grotesque, recent versions of that mode, e.g.
Helvetica; Geometric, e.g. Futura; Humanist, e.g. Gill
Sans.
VII, Glyphic, e.g. Albertus.
VIII, Script.
IX, Graphic, 'drawn' letters, e.g. Cartoon, but also black-
letter faces like Goudy Text.
It was realised by those of us who produced the BSI scheme
that to retain the use of 'transitional' and 'grotesque' was not
really satisfactory, but it proved too difficult to find better terms.
Garalde, though a reasonable label for Garamond, Bembo and
Sabon is hardly suitable for Ehrhardt, Janson and Caslon; a sub¬
section would be desirable. And it has been suggested that black-
letter types should have a group to themselves. The classification
was due to be revised in 1981, but it has not yet been dealt with.
Because of that, and because it has aroused little interest in the
United States, it is not used in this book. The fact is, any classific¬
ation is simply an aid to study, not an end in itself. Once the
student has got the characteristics of the groups firmly in mind
and can 'place' any type face without difficulty the actual names
of the groups, and their precision and logicality (or lack of it)
cease to be important.

When printing began, the type foundry was part of the printing
office; but towards the end of the sixteenth century punch-cutters
and founders began to set up on their own, and to sell their types
to printers all over Europe. The sizes in which they made their
types were not organised on any rational plan. At first there had
been the large sizes for folio volumes to be read at a lectern; then
the middle and smaller sizes for portable books. For convenience
the founders named the sizes after the works for which they had
first been made: hence Augustin and Cicero in France, and pica,
brevier and long primer in England. The cicero in Europe and the
pica in Britain became the units of measurement for line length
and type area. In England, where printing struggled against re¬
pression until the end of the seventeenth century, printers had to