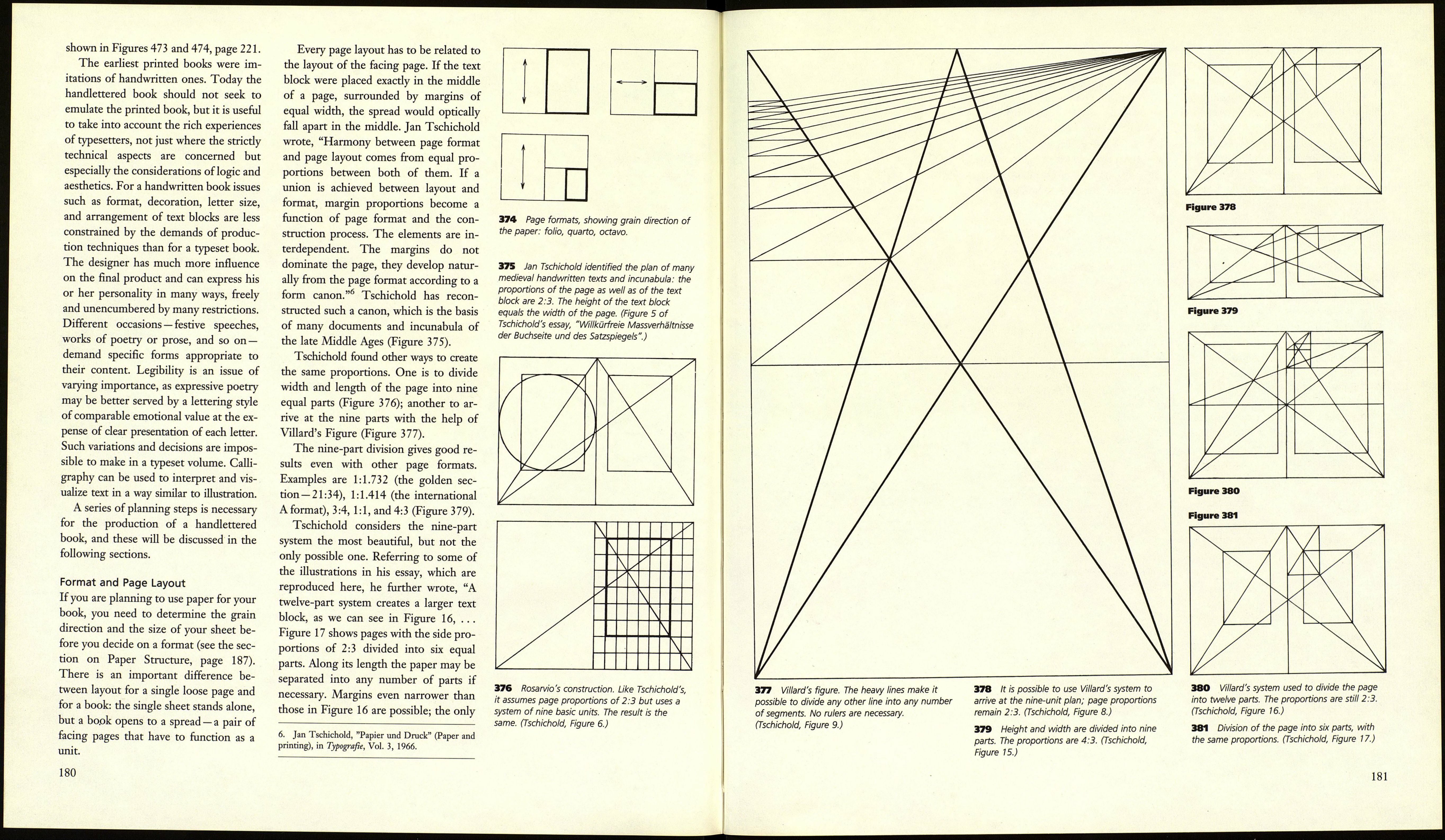 If the paper is not absolutely horizon¬
tal on the work surface, the gesso will
collect in the lower sections of the let¬
ters and the relief will be uneven in
height. Oudine the form with pen and
liquid gesso, fill in with a brush and
thicker gesso, and build the relief up
within the contours of the letter to a
height of at least Уз 2 inch (.25 to 1 mil¬
limeter) for letters of wide stroke widths.
The gesso will shrink as it dries, and it
is possible to add further layers, after the
surface has been slighdy scored with a
knife.

Work quickly. Delays may cause an
uneven surface, but small problems can
be corrected. Never burnish the surface
before the relief height is satisfactory: it
is difficult to add further layers to a
smooth one.

Gesso that has been accidentally
placed outside the letter can easily be cut
away after it dries; the same is true for
small drops of gesso spattered elsewhere
on the parchment.

Should the gesso become brittle dur¬
ing work, scratch it off and add glue or
binder to it, but frequent stirring will
prevent most problems. To predict the
length of the drying time is difficult: it
depends on the ingredients of the gesso,
the thickness of the relief, the humidity,
and the room temperature. Make some
samples of the same kind as your project
and test them periodically for dryness.
Thin lines have to be gilded before thick
areas. Johnston suggests drying times
from two to twenty-four hours.

Gold leaf has a tendency to stick even
to surfaces that are not covered with
gesso, so it is useful to cut a template
from lightweight paper to protect the
area surrounding the gesso buildup. Put
loose gold leaf on the gilder's cushion
and cut it with a gilder's knife; cut tissue-
backed (patent) gold leaf with scissors. Do
not sandwich gold leaf between two

sheets of paper. You can cut several
pieces at a time and position them at the
edge of a book or a box, as shown in Fig¬
ure 371, to use as needed.

To activate the stickiness of gesso you
have to breathe on it, section by section,
through a breathing tube (Figure 372).
Move the tube close to the surface, and
take care that your breath does not con¬
dense into drops that might fall onto the
gesso. Protect already gilded parts, as
well as those that have not yet been
treated, with strips of paper. The warmth
will dull the gold, while gesso that gets
warmed up too early loses its ability to
hold the gold leaf.

Apply the gold immediately after the
gesso is warmed. If you use a gilder's
knife to cut the gold leaf, you will also
need a gilder's tip — a brush used to pick
up the cut sections. Touch the tip to the
gold and it will adhere easily. Now hold
the tip over the spot that is to be gilded
and, using a cotton ball, press the gold
onto the paste from the back side of the
frame. This procedure is not only con¬
venient but also safe.

If you cut the gold leaf on tissue back¬
ing, set the gold onto the warmed gesso
and, with your fingers, push it down
gendy paper side up (Figure 372). Then
remove the tissue backing. Cover the gold
with glassine. Hold it in place with your
left hand so that it will not shift during
the following procedure and push the
gold onto the gesso through the glassine
with the pointed end of the burnisher.
Then rub the entire surface with the flat
side of the burnisher. If you are not sure
whether the gesso is hard enough for this
procedure, use a tighdy rolled wad of
cotton instead of the burnisher.

If the gesso dries out before the gold
is applied, it will not adhere well. The
same thing will happen if you touch the
prepared gesso and leave a trace of oil.
To remedy this problem, roughen the

373 Page (reduced) from a handlettered book
of Paul Eluard's poetry, I am not alone, by
Irmgard Horlbeck-Kappler. Leipzig, 1963.

surface and apply a fresh layer of gesso
or a thin layer of glair, which can also be
used as adhesive for small repairs in the
gold leaf.

Keep adding layers of gold leaf until
they no longer adhere. You may need as
many as three or four layers, because
gesso particles can penetrate the first
layer, especially if it is too liquid or if the
gold leaf is very thin.

Do not burnish until you are certain
that the gesso has dried thoroughly, and
test a sample piece. Homemade mixtures
are ready for burnishing just a few hours
after the gold application.

Start the burnishing process with
round movements of the burnisher, and
continue with straight strokes. If you
feel any resistance at all, stop im¬
mediately, look for any gesso on the bur¬
nisher, and remove it. This problem can
be caused by too much glue in the mix¬
ture or by insufficient drying time.
Sometimes it is enough to add more
gold leaf and wait a little while before
burnishing, but if the second attempt is
not successful either, you have no choice
but to scratch off the gesso and start
anew.

Small imperfections in the layers or in
the burnishing become clearly visible if
you use a strip of white paper as a reflec¬
tor. Protect your work from the humid¬
ity in your breath, and never touch it
with your fingers.

Excess gold leaf is usually easy to re¬
move after burnishing is completed. If
you cannot clean the pieces away with a
brush, scrape them off gendy with a
knife. Burnish again after eight to ten
days, and once more two weeks later.

Since the advent of printing, its ever-
increasing popularity has displaced the
handlettered book as a means of mass
communication, education, and enter¬
tainment. Today, the raison d'etre of the
handlettered book lies in the realm of
bibliophilia. Each piece is produced in¬
dividually, though it is possible to repro¬
duce a given work in small editions by
way of lithography or offset printing.

For more or less official occasions,
speeches, company histories, and the
like can be presented as handlettered
volumes and make appropriate gifts to
honored guests as souvenirs of the occa¬
sion. A well-executed calligraphic design
can meet such requirements more effi-
ciendy than a typeset book, since the
small number of copies needed would
rarely justify the necessary time and ex¬
pense for commercial typesetting and
printing.

The importance of the handlettered
book for private use should also not be
underestimated. There can hardly be a
more personal or unique gift. For many
of these works it would be difficult to
find a publisher, but it is possible to
create a small library of handwritten
books for specific purposes. For exam¬
ple, Goethe's father collected his son's
early poems in this form.

A third group of handlettered books
consists of artists' books — works created
by painters or graphic artists who are
less interested in the official or private
motive for the text, but rather wish to
interpret the contents in their own way.
This can be done using lettering alone,
but more often the text is combined with
illustrations, and the best results come
from works in which the character of all
elements is carefully matched — for exam¬
ple, the works of Matisse and Picasso