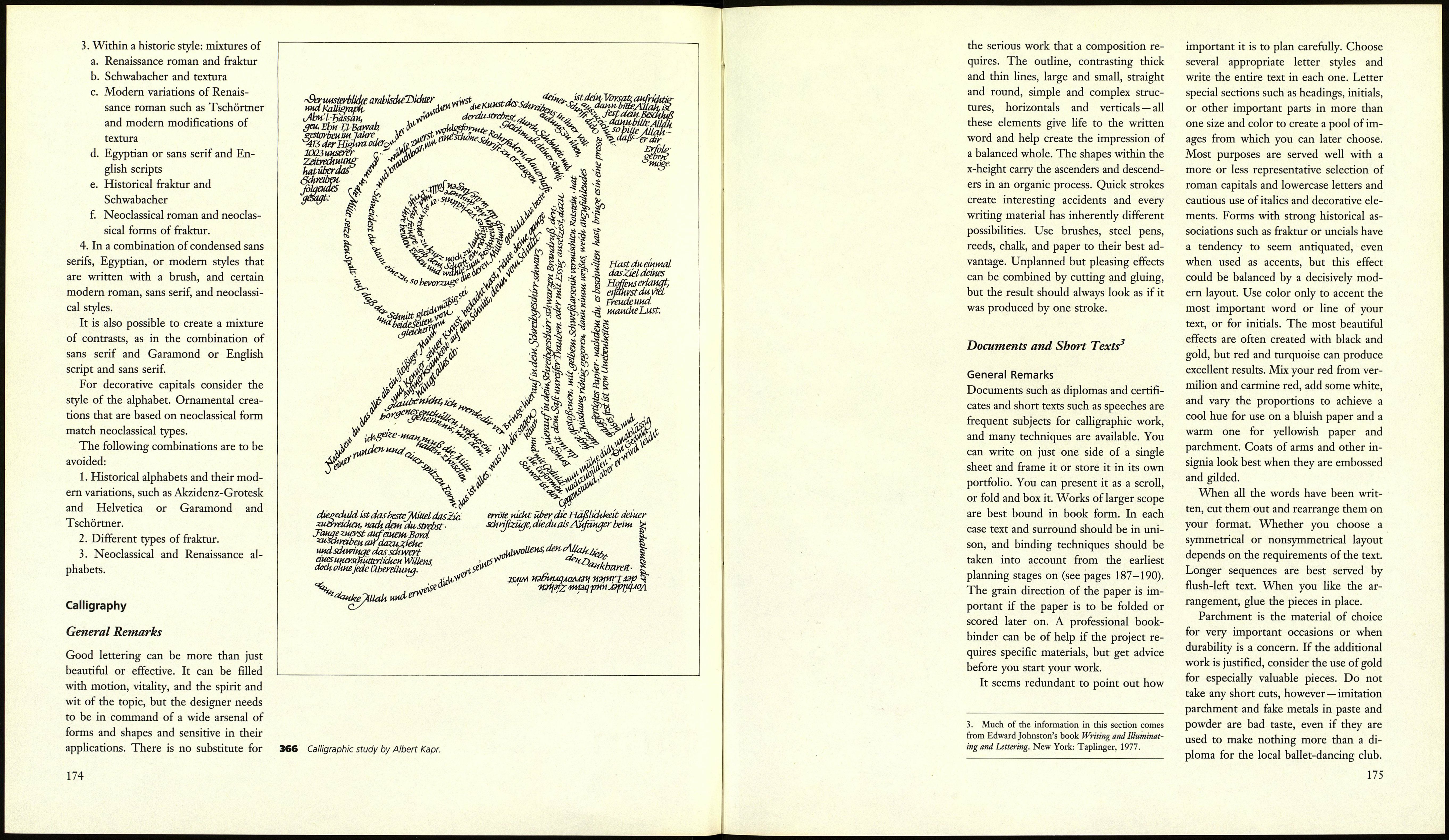 Whether lettering is the sole vehicle
of design or just a supplement, whether
it is drawn, set, otherwise copied, or
created in a three-dimensional form
from any appropriate material, the ob¬
jective is always a useful, harmonious,
and lively relationship between text and
letters, content and form. No single al¬
phabet can serve all purposes at once.
Design elements such as size and pro¬
portions of the format, margins, line
spacing, the color of paper and ink—all
these help determine the end result.
Even a relatively neutral typeface such as
a sans serif can appear in a rich variety
of forms simply through the different ar¬
rangement of the letters on the page.

If you want to find just the right type¬
face, one that fits the purpose and
matches the general concept of the
work, you, the designer, need the skill to
recognize an alphabet's scope for vari¬
ation and its range of expression. You
have to be able to utilize techniques and
materials in the best way. Step-by-step
instructions are impossible to give. The
following recommendations attempt
nothing more than to keep the student
from making the most common mis¬
takes. A personal and satisfying sense of
style will develop over time.

Always consider the individual con¬
tributing factors in their relationship to
the whole.

Match style and material. Tools and
materials contribute significantly to the
final form of your work. By the same
token, you should never force a style
into a form that has developed from an

unrelated process. Some tools are only
useful for letters of certain sizes. To en¬
large pen strokes beyond a certain
height or to model three-dimensional
forms after fluid brush strokes is to in¬
vite disaster.

Consider the attention of the reader.
The size, legibility, and expression of
type styles have already been discussed.
Decide whether these factors should be
given equal importance, or whether one
of them is preeminent in any given case.
The purpose of your work should sug¬
gest to what extent you can make the
typeface itself the carrier of the intended
message.

Where it is necessary, as in advertis¬
ing, go beyond the simple requirements
of visibility and legibility. Try to create
a layout that is original enough so that
viewers will remember it and recognize
it when they encounter it again.

Always keep the entire graphic con¬
text in mind. When you choose one
typeface, think about the other faces that
will be combined with it. Size and weight
relationships are subject to the same
laws as other compositional elements.

In connection with illustrations or
photographs, letters usually occupy a
position of minor importance. The in¬
herent contrasts can be heightened by
the choice of type. Relatively neutral
faces such as Garamond, Walbaum, Bo-
doni, or the sans serifs are best suited for
the job. Sometimes, however, it is possi¬
ble to create a special unity between
image and lettering by using matching
materials or tools —for example, brush-
drawn letters for a brush drawing. If you
are complementing someone else's work,
proceed with great caution and sensitivity.

Wherever possible, match the type¬
face to the content and the spirit of the
text. Part of the communicative function
of writing is the emotional impression it
makes on the viewer and the associations

that it creates on a conscious or uncon¬
scious level. Some designers try to create
the desired associations in misguided
ways: the name of a coal mine should
not be represented by letters that are
forced into the shapes of black lumps,
nor should a sign for a refrigeration
company sport letters that look like
melting icicles. Letters do not represent
things; where historical examples for
such attempts exist, they are nothing
more than curiosities. A possible excep¬
tion is the creation of logotypes, where
a fusion of letter and pictogram is jus¬
tified (Figure 364).

If you choose a typeface for literary
texts, for topics of art, music, or history,
match the time periods of your media.
The typeface will gain expressive force
from stylistic coherence. Study and
compare the historical styles of various
epochs to sharpen your skills. This ap¬
proach is not always the only possible
one to find the right form for a given
text. As Paul Renner wrote, "It is not our
job to outfit each literary idea with a
costume of its period; we only have to
ensure it a fitting dress in the style of our
own time."2

Historical associations are important,
but it is also necessary to consider the
graphic values inherent in the letters
themselves and the resulting psychologi¬
cal effects. Materials and tools possess
specific properties, such as smoothness,
precision, heaviness, or roughness. The
width of the basic stroke and its relation
to interior spaces and letter height
create narrow or wide, thick or thin let¬
ters (Figure 365). These proportions and
the thick-thin contrast make the text ap¬
pear airy and light, thin and dim, or

heavy and dark. The direction of the
basic strokes and connections between
them also create impressions: round,
soft, flourished, tight, pointed, hard,
stiff. The rhythm of movement can be
smooth, flowing, intense, swinging,
rigid, controlled, or monotonous; the
dynamic can be forceful, energetic, and
vigorous or restrained, inhibited, and
obstructed. The general expression can
be muted, intense, individualistic, differ¬
entiated, manneristic, or artificial. It is,
of course, impossible to assign a set of
descriptive attributes to each alphabet,
and it seems obvious that all characteri¬
zations are relative. We all connect cer¬
tain mental images to words, and it is
therefore possible to express properties
inherent in a thing by means of writing.

The designer's personality, tempera¬
ment, taste, imagination, and creative
power will necessarily influence the out¬
come, especially if he or she also designs
the alphabet. A good graphic artist will
never try to be original at any cost.
Some jobs require great restraint, and
designs for packaging or architectural
inscriptions call for almost total suppres¬
sion of the artist's personal preferences.

In typography as in calligraphy, it is wise
to avoid combinations of more than
three different elements in one design. A
possible exception is a purely decorative
treatment that is often used in contem¬
porary advertisements.

Mixtures are possible in the following
situations:

1. Within one alphabet group —that
is, mixtures of larger and smaller letters
that are otherwise the same.

2. Within a family of styles: mixtures
of roman and the related italic, upper-
and lowercase letters of an alphabet, or
bold and semibold roman.