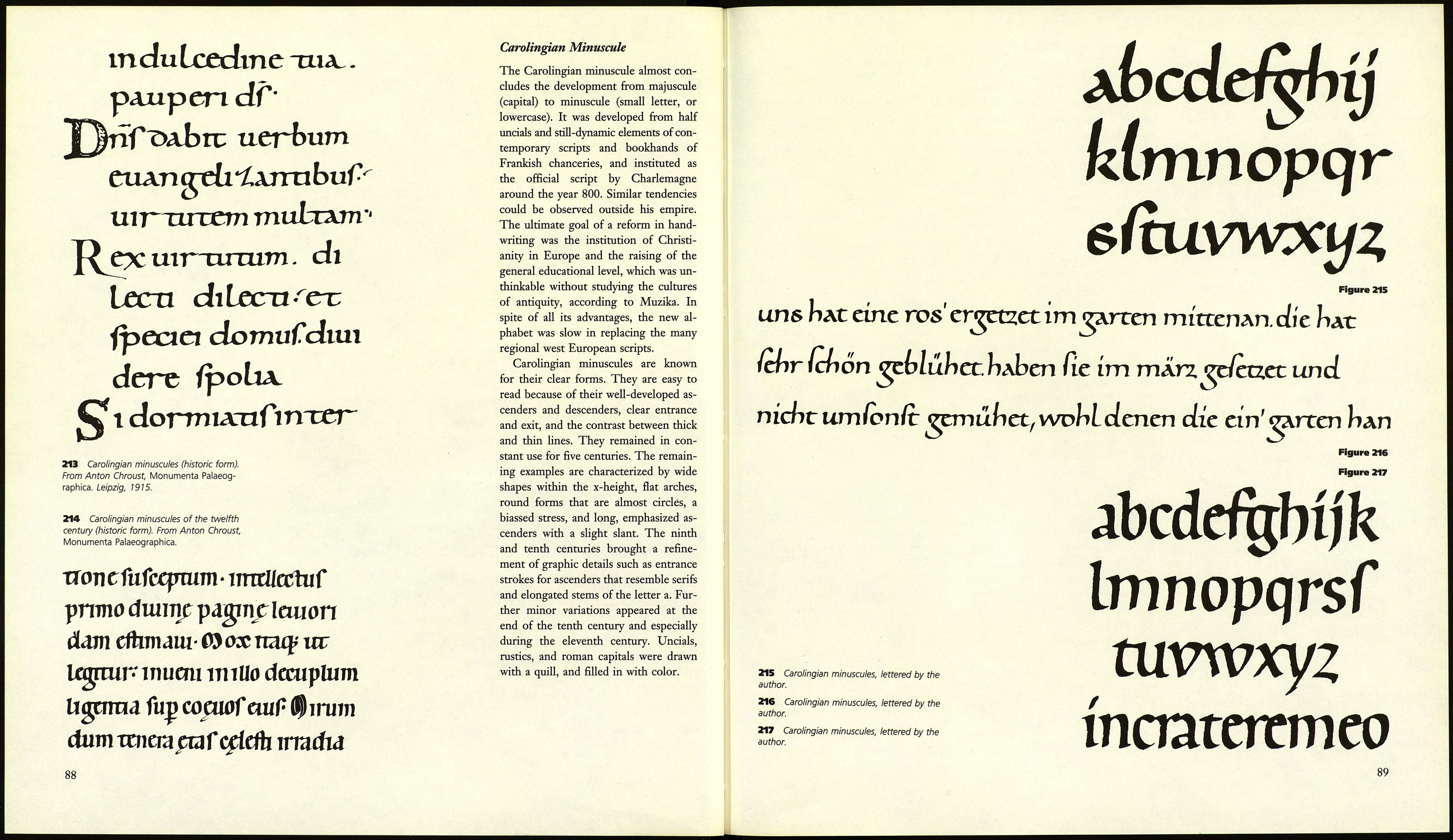 Uncials and Half Uncials

Uncials resulted from the development
of the early Roman cursive into a book-
hand. It contains elements of both the
cursive and the classical capitals.

Some examples suggest Greek uncials
as models; the A and the rounded M
especially seem to come directly from
Greek sources. Shafts of the D, F, H, L,
P, and R developed into ascenders or de¬
scenders. The substitution of curves for
straight lines can be attributed to Byzan¬
tine influences in culture and architec¬
ture. The final form of the letters was
made possible by the fact that parch¬
ment replaced papyrus and quill, which
in turn had replaced the stylus. All uncial
styles show a strong thick-thin contrast.

Up to the sixth century a flat angle of
the pen or a differently cut nib produced
an almost vertical stress. The shafts had
a blunt beginning and acquired slanted
and later horizontal entrance and exit
strokes over time. During the early
Middle Ages headings and first letters of
lines or paragraphs were created from
composite forms: outlines were drawn
first and filled in later.

Up to the ninth century half uncials
were in use together with uncials. The
half uncials were a bookhand developed
from elements of the Roman capitals,
and of the earlier and later Roman
scripts, the latter of which contributed a
large number of shapes. The later
Roman script also influenced the de¬
velopment of descenders and ascenders,

which typically are shaped like a club.
Strong differentiation between thick and
thin strokes is a similarity to uncials, and
so is the emphasis on rounded forms,
but the axis is slanted towards the
diagonal, giving a biassed stress.

Early medieval book and papal hands
are based on form elements of the earlier
Roman script. European national styles
like the West Gothic and the Mero¬
vingian show influences of half uncials,
whereas the Irish and Anglo-Saxon
styles seem to be variations of the half
uncials. All of these forms developed
characteristic eccentricities or decorative
elements to a point where further de¬
velopment was precluded.

205 Uncials. Detail of a study by Harro
Schneider.

207 Half uncials. Detail of a study by the
author.

208 Half uncials. Detail of a study by Harro
Schneider.

210 Variation of uncials. Study by the author.

211 Variation of uncials. Study by the author.

212 Half uncials. Study by the author.