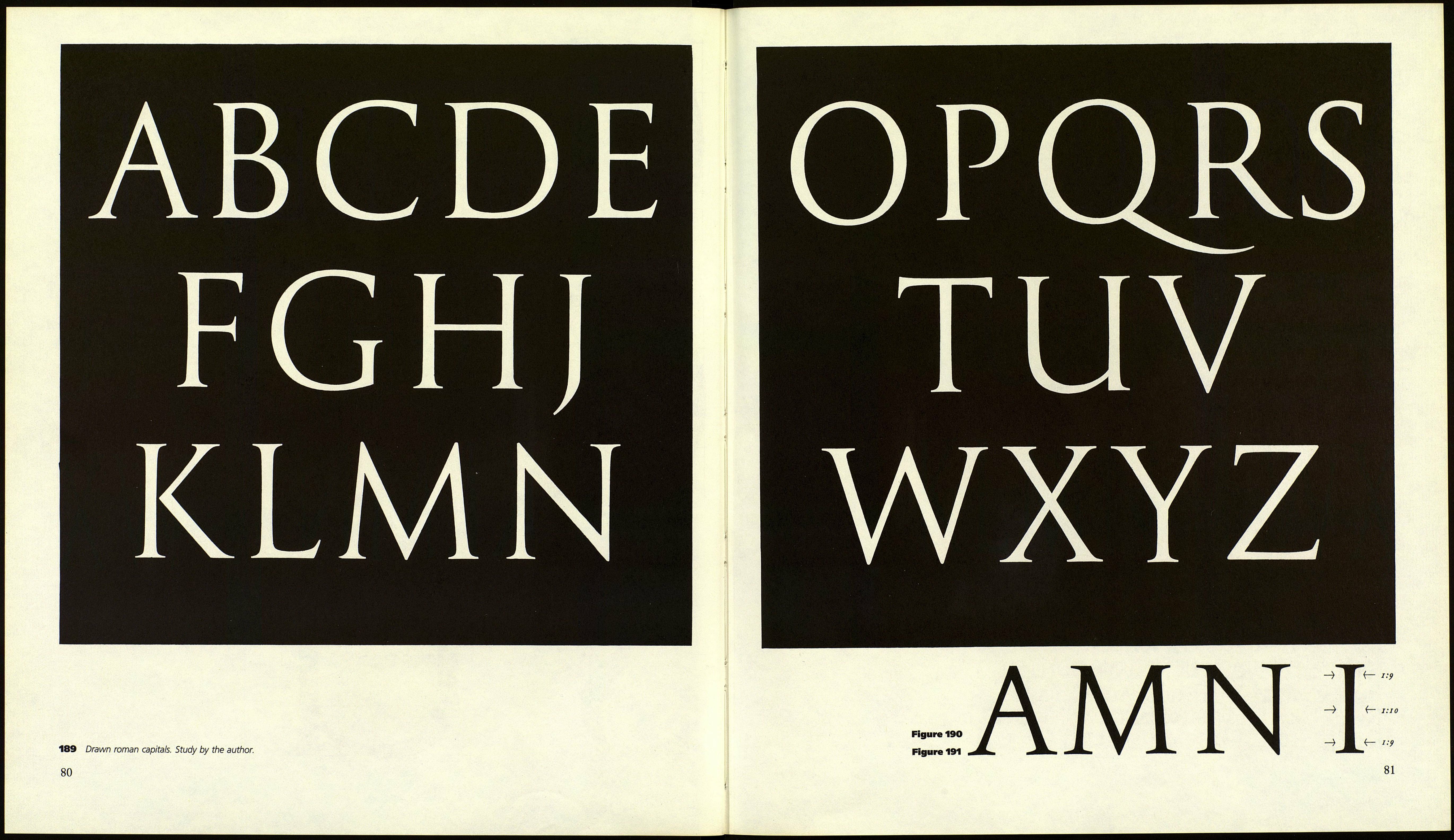 (0) Let the upper and lower curves of the
О extend slightly beyond the guidelines to
make this letter appear the same size as
the others. The contour looks almost like a
circle, but the oval that defines the inner
space has a slanted axis. The arch is
marked with an x on the parts where the
stroke width is even thicker than that of
the basic stroke. The thinnest parts corres¬
pond to half the basic stroke width.

(C, G, D) These letters are about 9 units
wide. The width can also be constructed
using the inscribed circle and the diagonals.
All forms are derived from the letter O, but
the curves on top and bottom are slightly
flatter. The G on Trajan's Column has a
vertical bar that is 4'/2 units long, but it is
acceptable to make it shorter. The serifs on
the С are smaller and more slanted.

(P) The P measures 5V2 units on its widest
part. The arch reaches below the geometric
middle and remains open at the bottom. To
give the arch the same weight as the bar,
draw it thicker at the spot marked with an
x. The same is true for the arches of R and B.

(R) The upper part is 5Ѵг units wide. The
middle horizontal lies below the geometric
middle and is thinner than the upper hori¬
zontal. Start the downstroke at a distance
of 7% units from the vertical bar and carry
it below the baseline to ensure that it will
not look shorter than the bar.

(B) The greatest width in the upper part of
the В is 4% units; in the lower part, some¬
what less than 6 units. Place the separation
in the optical middle. Draw the horizontals
less than half the width of the vertical bar.
Keep the middle horizontal thinner than
the upper one, but the bottom horizontal
line should be slightly thicker.

(S) The upper part of the S is 4% units
wide, the lower part 5Ѵг. It is constructed
from two semicircles that are flattened on
top and bottom. The best inscriptions
contain S shapes that seem as if they were
tipping forward slightly.

(U) The U is 8 units wide. For optical
reasons the arch reaches below the base¬
line. The widest part is marked with an x.