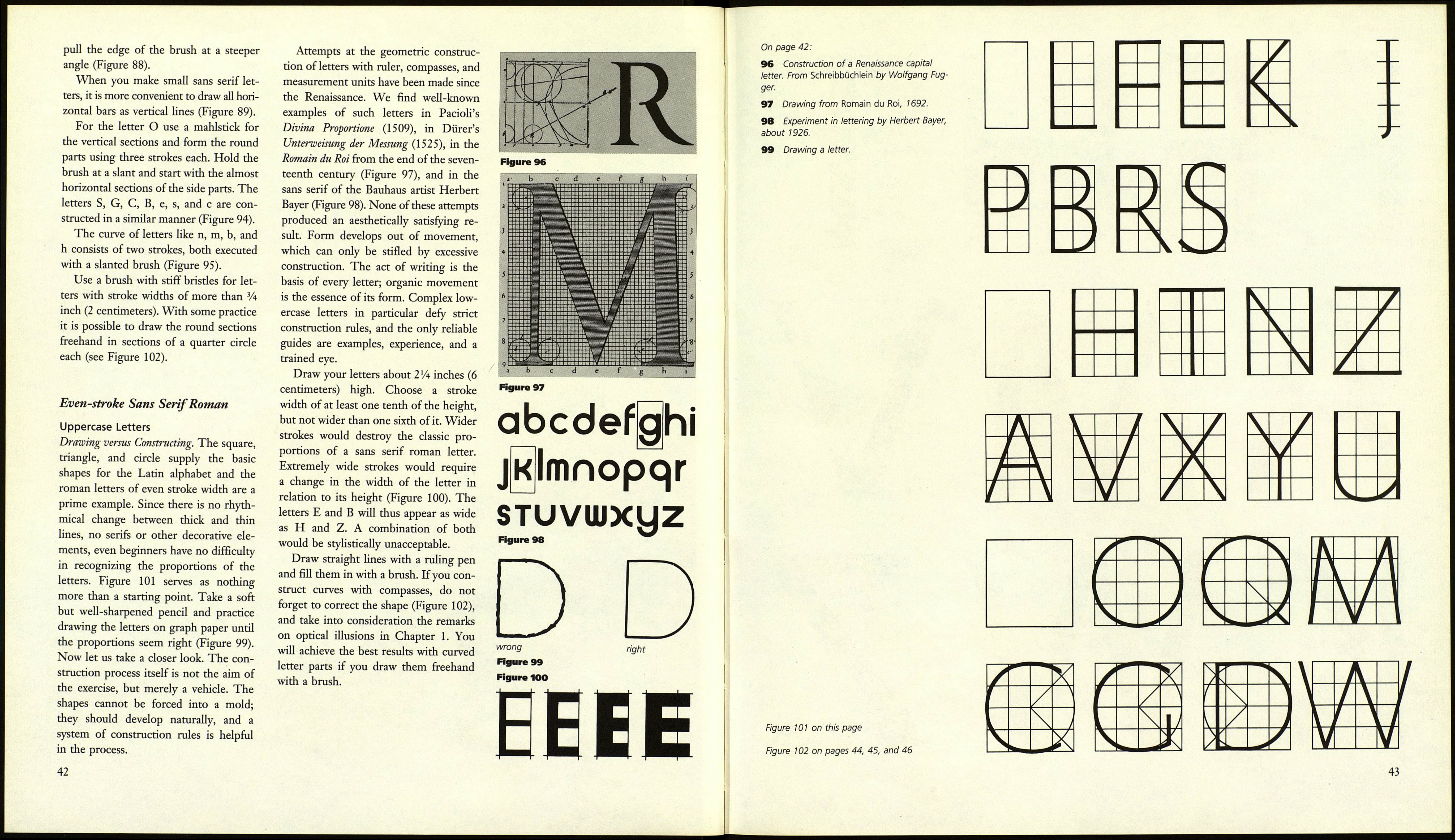 letters, or minuscules, should be one-
eleventh to one-twelfth narrower than
that of the uppercase (see Figure 34).

We will begin with the uppercase О
and H and with the minuscules m and o.
On these letters the width of the vertical
and horizontal strokes, the width of the
internal space, and its relation to the
height of the letter will be established.
A tall and narrow letterform usually ap¬
pears more elegant than a heavyset and
wider one. The space between verticals
should either be slightly wider or slight¬
ly narrower than the stroke width (Figure
84). If this rule is ignored, the image will
flicker in front of the viewer's eyes. Re¬
member the discussion on the relationship
between black and white areas of equal
size in Chapter 1. If the lettering is white
on black or any other colored ground,
adjust your measurements accordingly.

For the first exercise choose a space
between letters that is narrower than the
stroke width; this arrangement makes
proportions clearer and easier for begin¬
ners to handle.

Draw the horizontal lines somewhat
thinner than the verticals. In round parts
keep the upper and lower parts narrower
than the side parts (see Figures 29, 30,
and 32).

It is likely that you will have to make
several attempts at the shapes of H, O,
m, and о before you reach a satisfactory
arrangement of stroke widths and space
between letters and before you can pro¬
ceed to other letters.

Naturally you have to adapt the con¬
struction scheme for the letters A, V, M,
N, v, and w with respect to their widths.
Letters that are made up of several
strokes appear darker than letters with
fewer strokes. A letter В will require a
thinner vertical line than a J, I, or L.
The inner diagonals of N, M, and W
have to be considerably thinner than the
outer lines. The area along which a ver-
40

tical and a diagonal line meet should be
as wide as possible. This creates space
for the interior angles and avoids dark
spots in the design. Figure 86 illustrates
this principle. For the same reason an¬
gles should be drawn with exaggerated
points (Figure 85 and see Figure 35,
page 22). It is a characteristic of the con¬
densed sans serif that there are many
transitions between straight and rounded
forms. The effect of this typeface de¬
pends to a great deal on the successful
management of these transition points
(see Figures 36 and 37).

The point at which the curved part
meets the main stem is of special impor¬
tance in letters like n, b, and h (Figure
86). Keep the angle deep enough to be
visible in a photographic reduction of
the letter to a size of 3/ie inch (5 mil¬
limeters). Use a reducing glass.

A number of optical illusions and
other problems may arise which cannot
be understood in depth until the student
has progressed further. Figure 82 shows
a well-developed alphabet of condensed
sans serif. The designer here deviated
in several instances from the original
scheme, but for the beginner it is useful
to identify the already discussed points
and to pay close attention to careful
drawing and cutting.

When cut letters rest loosely on a
surface, they will produce shadows along
some of their edges. Cover them with a
sheet of glass for more precise control.

Work on the letters in the following
sequence: H, M, E, O, A, N, U, B, R, S,
h, m, n, r, u, o, b, e, a, s, g. Manipulate
these key figures until they satisfy your
demands with respect to stroke widths,
relationship of shapes, and width of the
letters. Frequently it is necessary to draw
several versions of a letter and decide
from the interaction with other letters
which version is the best one. Arrange
your cut letters into words before you

90 a and b Holding a mahlstick: different
finger positions.

91 Drawing a line with a mahlstick on a hori¬
zontal surface.

92 Drawing a line with a mahlstick on a wall.

93 How to hold a flat-tipped brush.

glue them in place, and check their size,
proportion, relationship to each other,
gray values, and their overall beauty.
No single letter should stand out as a
strange element.

Use gum arabic to glue the letters
down. It will not cause the paper to
expand and later contract in wrinkles,
because it will not be absorbed. Apply
the adhesive only on strategic spots and
you will be able to make changes if neces¬
sary. Visible spots of gum can be re¬
moved with an eraser.

Lettering with a Flat Brush
A flat brush is an appropriate instrument
for lettering condensed sans serif. Use a
mahlstick to draw straight lines. The
technique for using it on a vertical or
horizontal surface varies, and may pose
problems for the beginner, but it is ad¬
visable to attempt the method shown in
Figures 91-93, since this will be most
useful in the long run. A horizontal sur¬
face should be brought to an angle of at
least 30 degrees. Wrapping paper is the
most convenient material.

Start by practicing strokes in the size
and width of an I. Hold the edge of the
brush horizontally when you draw a
vertical line; hold it almost vertically or
slightly slanted when you draw a hori¬
zontal line. Draw the beginning and end
part of the strokes securely and with de¬
termination. Subsequent attempts to patch
a timidly drawn area will always be visible.

Use the mahlstick at a slant for
diagonals and finish the corners at the
end. The edge of the brush can also be
held horizontally from the beginning of
the stroke to the end. Some pressure or
a second stroke, slightly overlapping the
first, may be necessary to achieve the
desired width (Figure 87).

The letters M, W, and N present spe¬
cial situations because their inner diag¬
onals are narrower. Here you have to