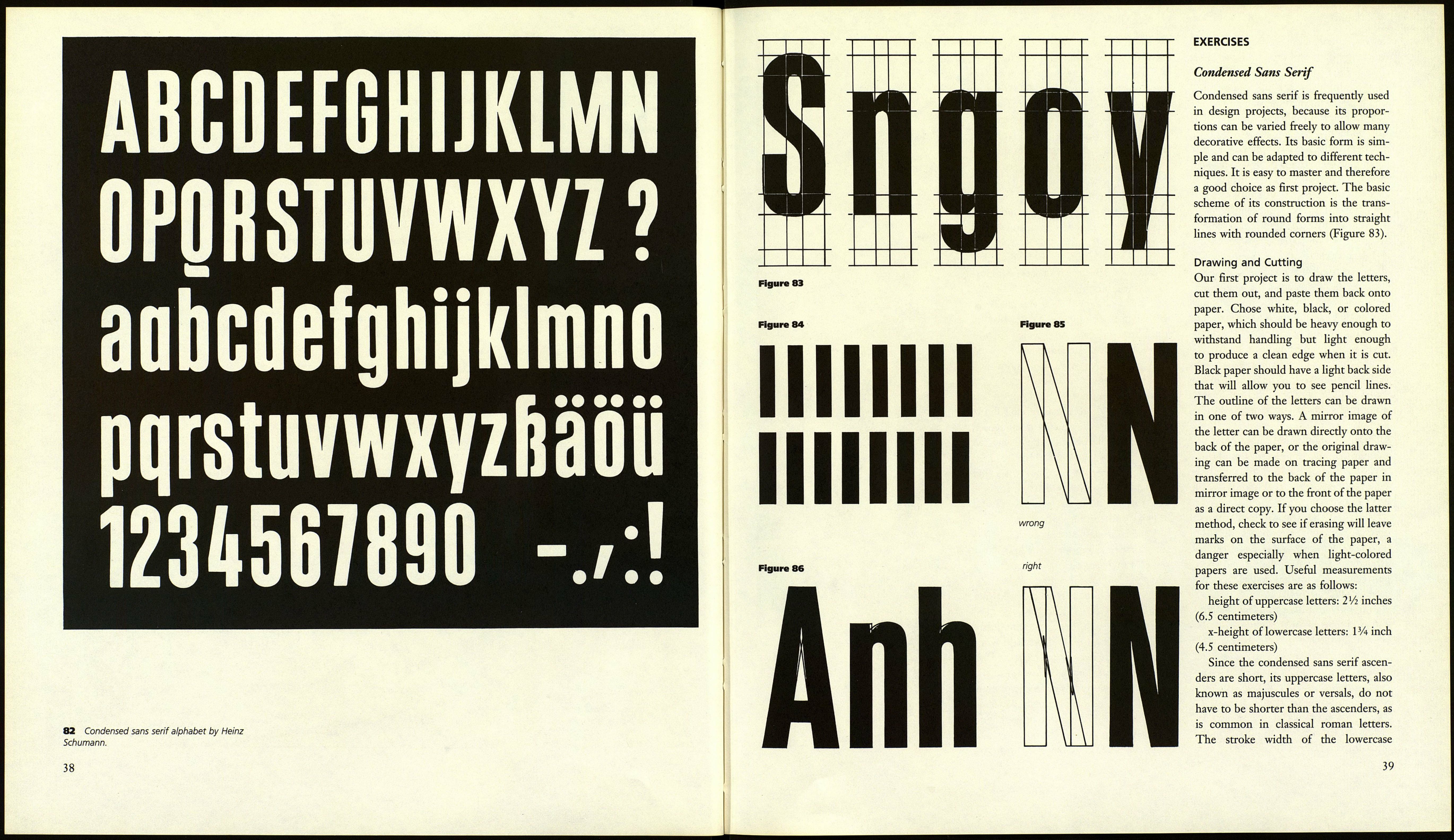 Brushes are used for making large let¬
ters, for lettering on vertical surfaces and
on surfaces that have a painted ground.
Brushes can be categorized according to
the shape of their bristles into round,
flat, and pointed ones (Figure 77). Vari¬
ations of all these forms are available.

Use round brushes for letters with
equal stroke widths. The best brushes
are made of red sable hair. A brush with
a less than perfect shape can sometimes
be saved by dipping the hair belly into
water-soluble glue and rubbing it on a
polishing stone until the desired form is
achieved (Figure 78).

Mix the paint in a specially designated
container, never in the original one. Do
not use your lettering brush to stir the
paint; an old brush will do the job. For
large amounts of paint use a stick. There
should be no lumps and the paint should
flow freely. Dip the brush to the ferrule
and turn it at the rim of the container to
remove all excess paint except for a small
drop at the hair point, which will form a
perfectly round dot where the brush
meets the paper. The beginning and the
end of the stroke can be rounded sepa¬
rately with a round or flat brush; how¬
ever, this technique is not compatible
with most writing styles that are exe¬
cuted with a round brush.

Use flat brushes for letters with varied
stroke thicknesses. Red sable provides
the best spring. When the brush is
damp, all the hairs should be in perfect
alignment; any protruding bristles can
be carefully trimmed into shape with a
pair of scissors. The paint should be thin
but not transparent. Dip the brush al¬
most to the ferrule and wipe off excess
paint on both sides at the edge of the
mixing bowl. Hold the brush as if it were
a pen with a right-angled nib. Since up¬
strokes tend to disturb the shape of the

brush quickly, it is advisable to construct
letters in as many downstrokes as possi¬
ble. Even letters of equal stroke width
can easily be executed with a flat brush,
which can be turned to follow the shape
of the letter (see Figures 93 and 115).
Hog-bristle brushes come in different
shapes and are best used for large letters.
Writing long straight lines with a brush
is easier with the help of a mahlstick
(Figures 90, 91, 92).

Pointed brushes are most often used
for drawing. The damp brush should
have a perfect hair point; any hair that
protrudes beyond it can be trimmed off
with a razor blade. Dip the brush into
the paint lightly and remove the excess
on a glass or porcelain plate in a round
motion. The stroke of a pointed brush
starts in a hairline and swells with in¬
creasing pressure (Figure 80). When
necessary, turn the paper rather than
twisting your hand to complete the out¬
line of a letter.

Take good care of your brushes. Wet
them in water before each use and
squeeze the water out again. This will
prevent paint from settling inside the
ferrule, which could later destroy the
hair. Never let the paint dry on the
brush; later attempts at removing paint
can turn the hair brittle. If you use

water-soluble paint, wash your brush in
soapy water after each use. If you use
oil or emulsion-based paint, clean the
brush in turpentine first and rinse with
soapy water. To preserve the shape of
your brushes perfectly during storage,
dip them into water-soluble glue and
fashion a cardboard holder with elastic
loops for each brush.

An experienced letterer can use all kinds
of implements, such as different-shaped
pieces of wood, old hog-bristle brushes,
felt-tip markers, chalk, and other mate¬
rials to create many surprising effects.

Use a hard pencil (6H) and pointed sable
brushes, preferably one for black and
one for white. The best sizes are narrow,
such as a number 2 or 3. Other useful
items are tracing paper, a razor blade,
a ruler, a metal square, pushpins, com¬
passes with ink attachments, a magnifying
and a reducing glass, and fine sandpaper
mounted on a wood block to sharpen
your pencils.

81 The right way to hold a pen. From the
facsimile edition of Schreibbüchlein (Little writing
book), by Renaissance master Wolfgang Fugger.
Leipzig, 1958.