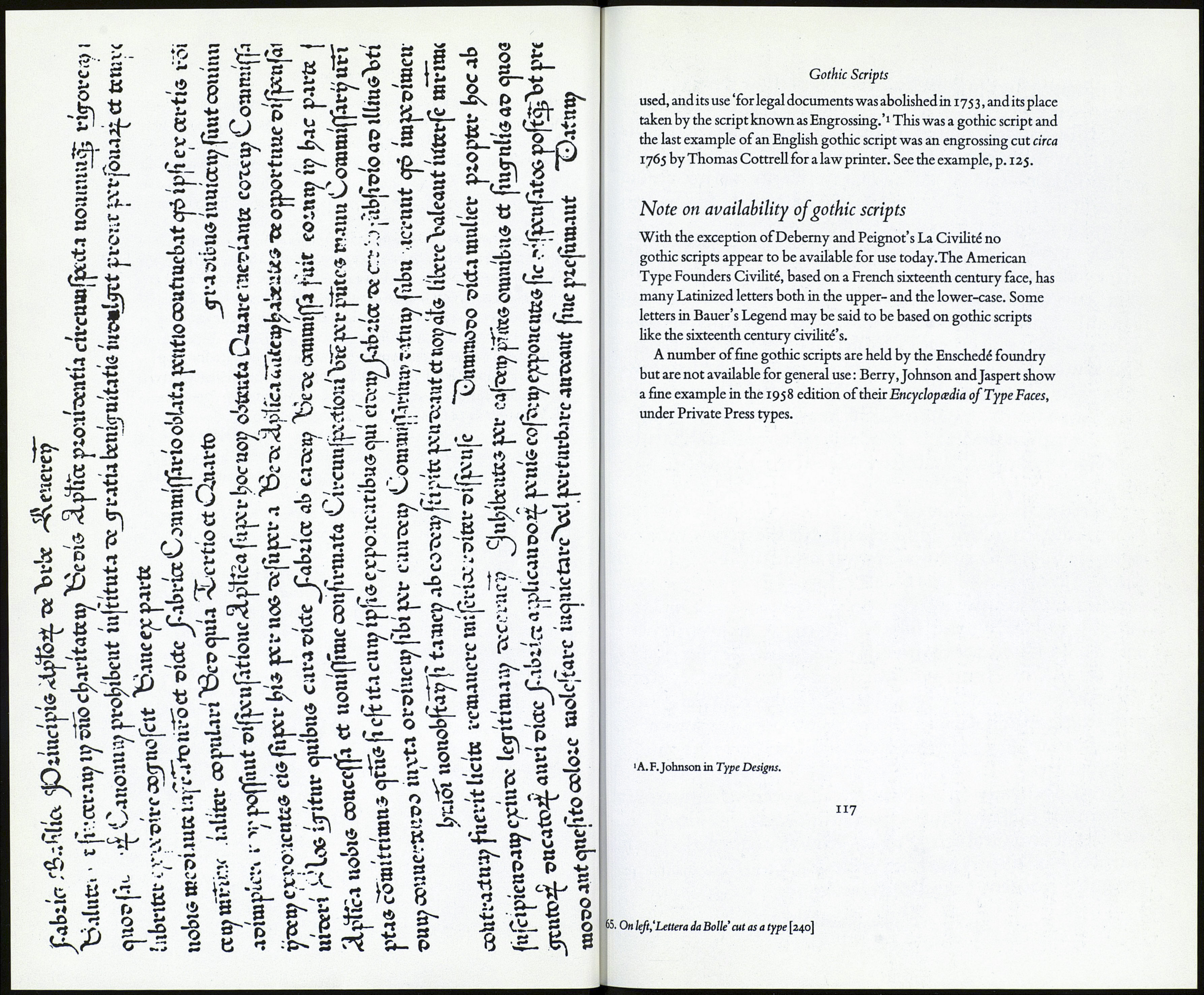 Germany were based on these more formal gothic script hands. See the
illustration on page 118. In Germany very few books appear to have
been set in script types. Mr Johnson thinks that that was possibly be¬
cause the German printers used them in the modern way, that is in the
production of ephemera. During the seventeenth and eighteenth cen¬
turies the tendency of German script types to become lighter contin¬
ued and towards the close of the latter century close-fitting of the let¬
ters was attempted in order to make the lines appear handwritten. See
the example on p. 120. In Germany, scripts of this kind 'remained the
standard script throughout the nineteenth century.'1

Robert Granjon, the famous type designer, thought that his country
should also have types based on current handwriting for books set in
French.The popular name for his script types—civilité—derived from
the titles of two books on good manners printed in 1559 and 1560 re¬
spectively. But though he printed many books in his civilité it was not
a popular type in France. His 'intention of introducing a new "lettre
française" entirely failed — Books had ceased to be hand written and

Granjon, in his attempt to introduce a rival to italic, was too late___

what he designed proved only an historical curiosity in typography,
which is after all what most of the script types are.They have no bearing
on the development of our principal book faces.'2

In the Netherlands however civilité enjoyed a wider use. Granjon
supplied Plantin, among others, with his civilité types and Granjon's
scripts were copied.

The earliest English writing book appeared in 1571. In it was shown
a gothic script based on the ordinary Elizabethan hand and named
secretary. It was not available in type form until 1576 and does not ap¬
pear to have been used for the printing of books but in the modern
manner, i.e. for wine licences, marriage licences, on circular letters de¬
manding loans etc—and also in the printing of music, the latter a use
to which script types were commonly put. At least two other varieties
of secretary were cut, but in addition to these there was another gothic
script of considerable antiquity, a legal, and upright script called Court
hand. See the example on p. 124. The type cut from it was not much
12A. F.Johnson. Type Designs: their History and Development.