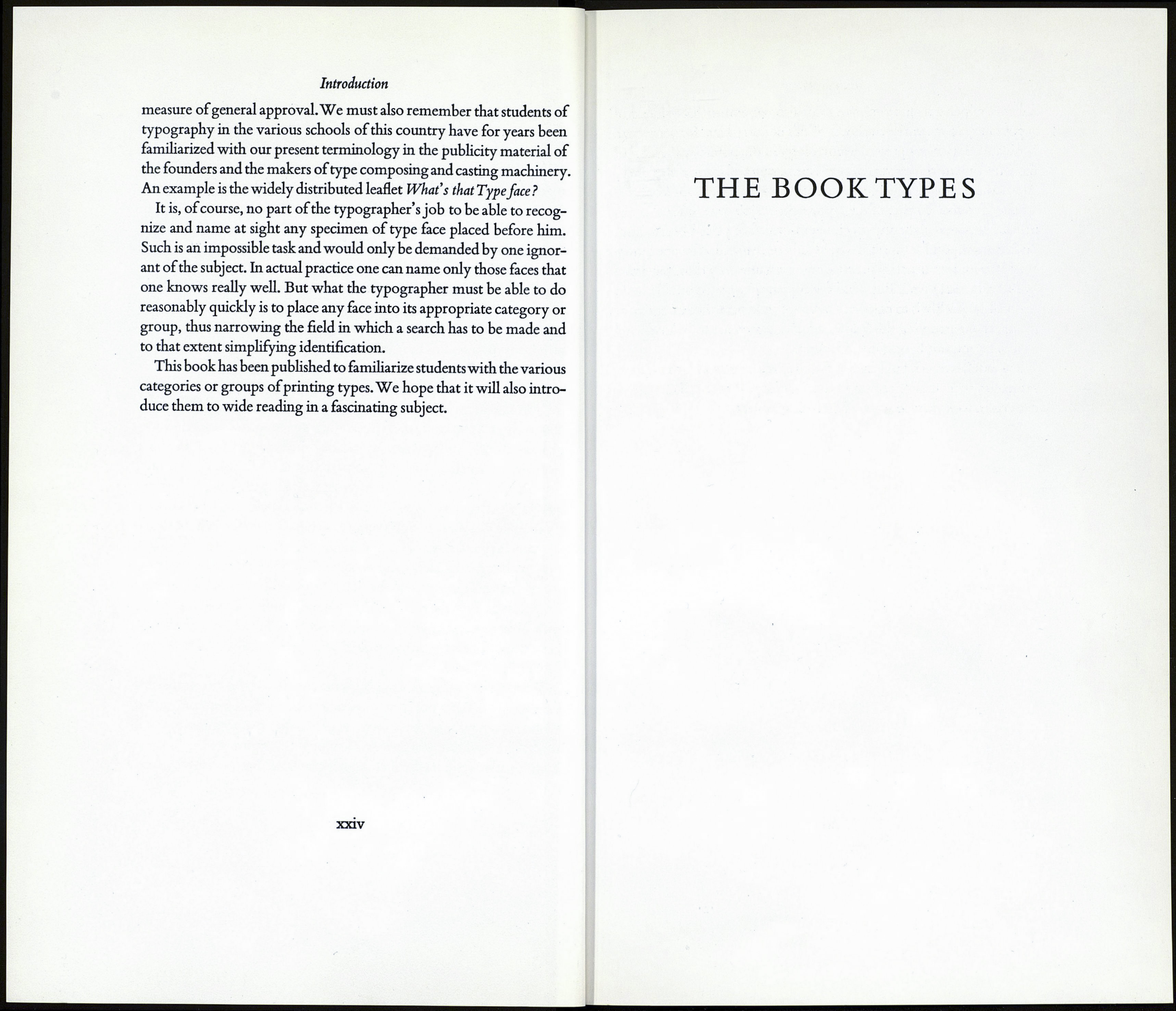 signs such as Garamond or Bodoni. Versions of these two, for example
have been cut by foundries in this country, in Europe & in America each
with the particularfoundry's variations from Garamond's orBodoni's
original designs. The clamour for more and more display faces by the
printers & designers of ephemera has resulted in awhole range of weights
and widths being cut for many of the faces originally designed as types
forbookwork.

A sine qua non of any system of type face classification is that the types
accepted should conform to reasonably decent standards of letter de¬
sign. The work of the would-be reformers of our present system of
nomenclature would be immeasurably simplified if they began with a
firm resolve to ignore the scores of faces which are patent distortions of
good letter forms. No usefulpurposeis served by attempting to assign to
particular categories types like Kino, Parsons, Belwe, Hobo and Royal
Lining, to name but a few of a large class. Not only would the task of the
classifiers be lightened if they ignored the badly designed typefaces still
available for hand & machine composition but students of typography,
to whom the ramifications of type face nomenclature are sufficiently
confusing without the addition of worthless material, would not be led
to believe—because they have seen some of these 'designs' included in
suggested systems of classification—that there must be something ofin-
trinsic worth in these productions of the nineteenth & early twentieth
century and in other more recent travesties of the roman alphabet.

Of the suggested systems of classification much has been written of
that devised by M. Maximilien Vox first published in Paris in 1954. In
it all types are classified under nine (originally ten) heads.We shall not
outline M. Vox's scheme here for descriptions &c criticisms have already
appeared in various journals, the names of which will be found among
a list of suggested systems for the classification of type faces published
since 1921 in Berry Johnson and Jaspert's Encyclopaedia ofTypefacesiQ$b.
Inanexcellentreview.NEWAPPROACHESTOTHE classification of
typefaces by Mr James Mosley, Librarian of the St Bride Foundation
Printing Library, published in The British PrinterMarch i960, students
will find much interesting material for study.

There is no doubt that our typefounders, our printers, & some writers
on typography are regrettably largely responsible for the present con¬
fusions in the naming of type faces despite the fact that works on this
subject have been available since the early 1930's.To mention but two
there were Mr A. F. Jolrnson's series of articles inPaper & Print, a guide
to present-day types, and his book Ty^eDwi^ns, first published in
1934. Many printers have not even adhered to the names given to the
types by their founders. Instead they have invented completely new ones
in some cases or even more inaccurate ones. Examples of such mislead¬
ing changes will be found in this writer's plea for a rational terminology
which appeared in Typographica No 4, published in 1951. That article
was responsible for the series of meetings arranged by the British Stand¬
ards Institution on this subject.The work of this BSI Committee is still
in progress.

In this book we have adhered to Mr Johnson's classification of type
designs almost entirely, for two reasons. First, to those who have made
any study of typography the terms gothic, Venetian, old face, transition¬
al, modern, Old Style, twentieth-century, shaded, egyptian, & so on are
names with which they are perfectly familiar : each presents a clear men¬
tal picture of a particular design of letter. Certainly to a layman the term
modern in relation to a type face would mean a design which had a con¬
temporary flavour. But to typographers it has one well-defined mean¬
ing only : a type face with vertical stress, great contrast between thick &
thin strokes, hairline serifs and so on. Does it really matter then that the
term is meaningless outside the field of typography—that it was used
originally to describe a face which was quite unlike the old faces with
their oblique stress, gradual modelling and bracketed serifs which had
been in use for nearly three hundred years before the first fully-fledged
'modern'face appeared?

Second, all the classics or authoritative works on the history of type
faces to which this work is intended as an introduction, and many other
works on typography, have used our present familiar terminology. It is
most unlikely that any of these works would be reprinted to make them
accord with a system which, though formulated, had as yet secured no