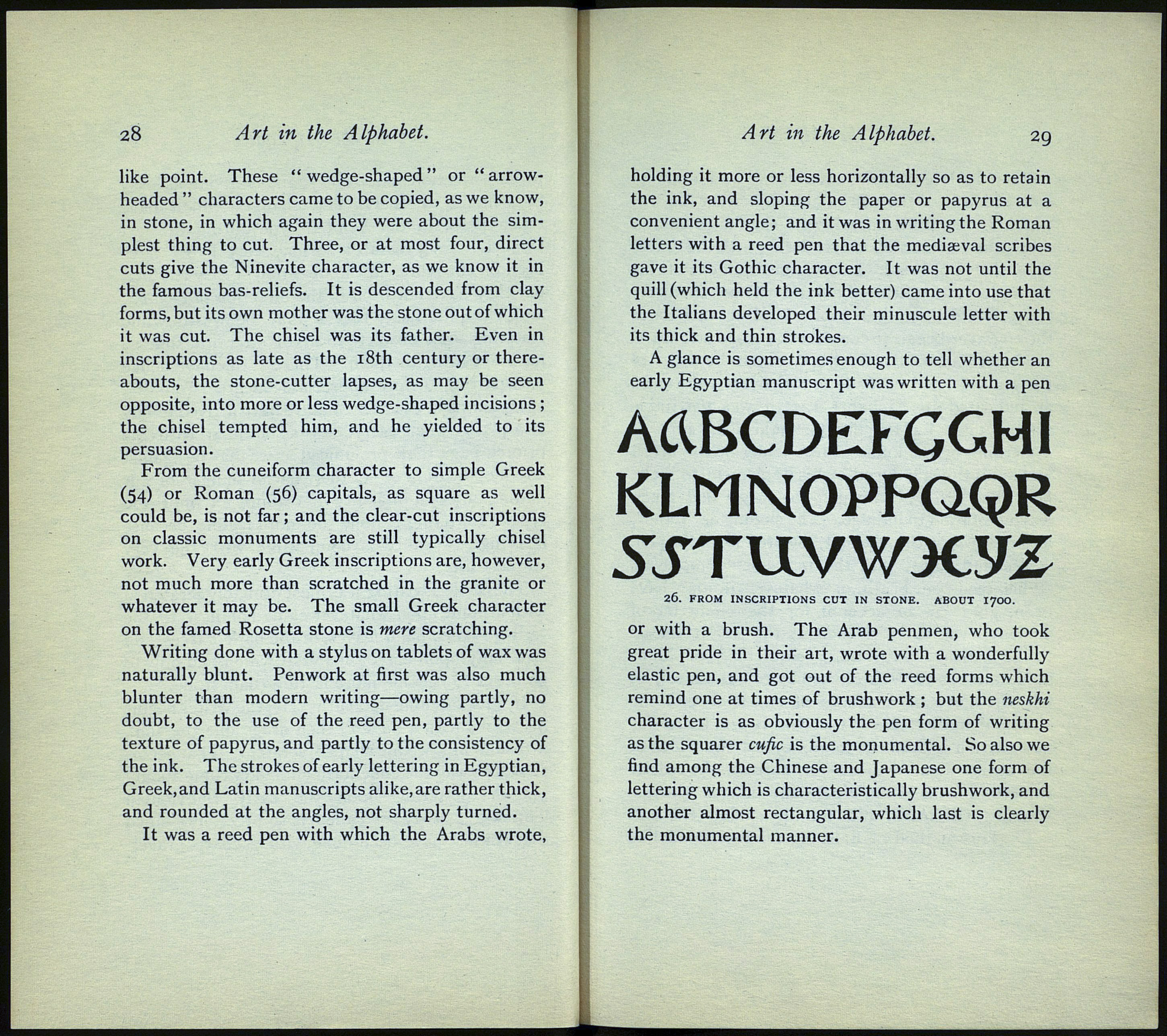 like point. These " wedge-shaped " or " arrow-
headed " characters came to be copied, as we know,
in stone, in which again they were about the sim¬
plest thing to cut. Three, or at most four, direct
cuts give the Ninevite character, as we know it in
the famous bas-reliefs. It is descended from clay
forms, but its own mother was the stone out of which
it was cut. The chisel was its father. Even in
inscriptions as late as the i8th century or there¬
abouts, the stone-cutter lapses, as may be seen
opposite, into more or less wedge-shaped incisions ;
the chisel tempted him, and he yielded to its
persuasion.

From the cuneiform character to simple Greek
(54) or Roman (56) capitals, as square as well
could be, is not far ; and the clear-cut inscriptions
on classic monuments are still typically chisel
work. Very early Greek inscriptions are, however,
not much more than scratched in the granite or
whatever it may be. The small Greek character
on the famed Rosetta stone is mere scratching.

Writing done with a stylus on tablets of wax was
naturally blunt. Penwork at first was also much
blunter than modern writing—owing partly, no
doubt, to the use of the reed pen, partly to the
texture of papyrus, and partly to the consistency of
the ink. The strokes of early lettering in Egyptian,
Greek,and Latin manuscripts alike,are rather thick,
and rounded at the angles, not sharply turned.

It was a reed pen with which the Arabs wrote,

holding it more or less horizontally so as to retain
the ink, and sloping the paper or papyrus at a
convenient angle; and it was in writing the Roman
letters with a reed pen that the mediaeval scribes
gave it its Gothic character. It was not until the
quill (which held the ink better) came into use that
the Italians developed their minuscule letter with
its thick and thin strokes.

26. FROM INSCRIPTIONS CUT IN STONE. ABOUT I70O.

or with a brush. The Arab penmen, who took
great pride in their art, wrote with a wonderfully
elastic pen, and got out of the reed forms which
remind one at times of brushwork ; but the neskhi
character is as obviously the pen form of writing
as the squarer cufie is the monumental. So also we
find among the Chinese and Japanese one form of
lettering which is characteristically brushwork, and
another almost rectangular, which last is clearly
the monumental manner.