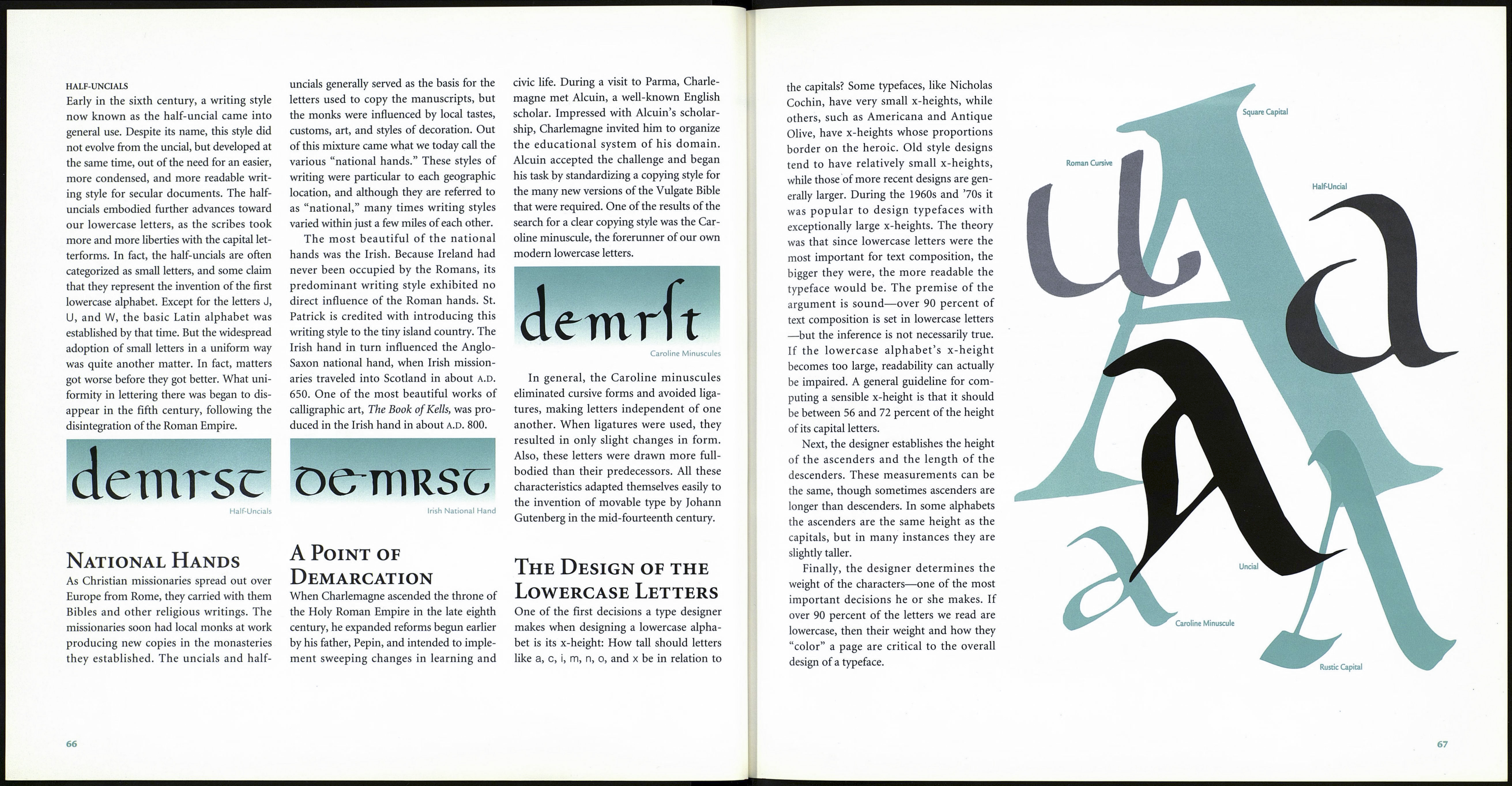 Elegant tools for communication that were
wrought to command respect and atten¬
tion for millenia, the capital letters
designed by the ancient Romans were—
and still are—perfect for inscribing on
monuments. However, for the commercial
documents, literature, correspondence,
and even the grocery lists and graffiti that
were as much a part of ancient Roman life
as they are of life today, these letterforms
were less than ideal. Think about it: How
would you like to write your next memo or
grocery list in slowly constructed capital
letters? (Neither did the Romans.) Form,
as always, follows function, and in due
course the capital letters began to change
to better serve these other, less monumen¬
tal, purposes.

While monumental inscriptions were cre¬
ated by stonecutters, graphic communica¬
tion was produced by scribes. These were
specialists hired to record all kinds of
information on papyrus or other transient
writing surfaces, and their writing tools
gave them more freedom and flexibility
than the stonecutters had with their carv¬
ing implements. It is uncertain whether the
scribes adapted the inscriptional capitals to
meet their needs or developed their own

writing styles first, but over a period of
time three different forms of handwriting,
or hands, emerged that replaced the formal
capitals in everyday graphic communica¬
tion. These three styles came to be known
as the square capitals, the rustic or simple
capitals, and roman cursive.

The square capitals are generally consid¬
ered an attempt to copy inscriptional let¬
ters. This writing style was reserved almost
exclusively for the production of the most
formal books and documents. The preci¬
sion and regularity of their forms shows
that these letters were drawn slowly and
carefully. Still, they were written more
quickly and with a more flowing hand than
was possible, or practical, in stone. As a
result, even though the square capitals
were rendered to resemble the capital let¬
terforms, they differed significantly from
the inscriptional forms.

The square capitals were proportionally
wide, and the material on which they were

printed, vellum, which was painstakingly
prepared from calfskin, was expensive.
Those who oversaw the production of
books and documents realized that the
costs for inscribing less important infor¬
mation could be reduced significantly if
the writing were done in letterforms that
were narrower and easier to draw, conse¬
quently saving both materials and time.
What have come to be known as the rustic
or simple capitals (rustica in Latin) were
the eventual solution.

Not all writing had to be fancy. Most of it,
in fact, was used to record transactions,
keep accounts, draft correspondence, and
document other day-to-day business. The
writing style used for these relatively mun¬
dane applications differed from both the
square capitals and the rustic capitals.
Roman cursive was the ordinary business
and correspondence hand of the Romans
until approximately a.d. 500. It was used
for legal documents, notices posted on
walls announcing public games, signs
advertising houses to let, and other com¬

monplace interchanges. Since these kinds
of writing were not usually intended to be
permanent, they were often scratched in
wax tablets, in clay, or on masonry, or
written on papyrus. Sometimes they were
so carelessly written that the result was an
illegible scrawl. In spite of this, the very
speed and carelessness with which these
letters were written led to the present
forms of many of our small letters. The
roman cursive form was characterized by
the tendency of the writer to keep the pen
on the papyrus as much as possible while
writing; hence the term “cursive,” which
literally means “running.” That is, cursive
writing reflected the feeling of a hand
moving across the page as it created the
letterforms. An important innovation of
the roman cursive hand was the tendency
toward creating ascending and descending
parts on some of the letters. This probably
came about because it was easier to make
longer stems when writing quickly, as
opposed to the precise, short lengths used
in more formal and more slowly written
documents. Although the scribes were not
aware of it at the time, the ascenders and
descenders they incorporated into this
casual writing style helped establish an
important departure in design from the
capital letterforms.

While the three original Roman hands
were used for almost 500 years, two events

shortly following their development led to
some additional, and quite different, styles
of calligraphic writing.

In addition to being a military and political
juggernaut, ancient Rome was also a major
literary force. The Romans became the first
major producers of written documents.
Plays and poems were written, philosophi¬
cal treatises were published, and, once
Christianity became Rome’s state religion,
Bibles and religious commentaries were
needed for scholars and missionaries. All
this created great volumes of work for the
scribes, which in turn spawned two new
styles of writing: uncials and half-uncials.

Uncial letters grew out of an effort to
develop a beautiful formal writing style for
Bibles and other important books. The
dilemma facing the scribes was that the
square capitals used for the most formal
books were costly to produce, and that the
rustica were not elegant enough for formal

documents. Applying the lessons they had
learned from the cursive hand to the
square capitals, the scribes eventually
achieved the rounded forms of the uncials.

Uncials were used for fine calligraphy
from the fourth to the ninth centuries a.d.
Usually a square-nibbed quill or reed pen
was used to create them. Uncials are espe¬
cially important because they are the first
obvious step toward the creation of our
current lowercase alphabet. Rounder
shapes for the A, D, E, H, and M evolved.
Try writing a capital A quickly in one
motion, or an H or an M, and you’ll begin
to see how our lowercase forms became
the “little brothers” of the roman capitals.

Many scholars, referring to St. Jerome’s
first use of the word, explain the term
“uncial” as indicating letters one inch in
height. Uncia, which means “one-twelfth”
in Latin, was a unit of measure used by the
Romans that is roughly equal to an inch.
The problem with this generally accepted
interpretation is that there were no uncials
of that size in the manuscripts of the peri¬
od. Hindsight suggests that St. Jerome
probably meant merely “large letters”
when he coined the term.