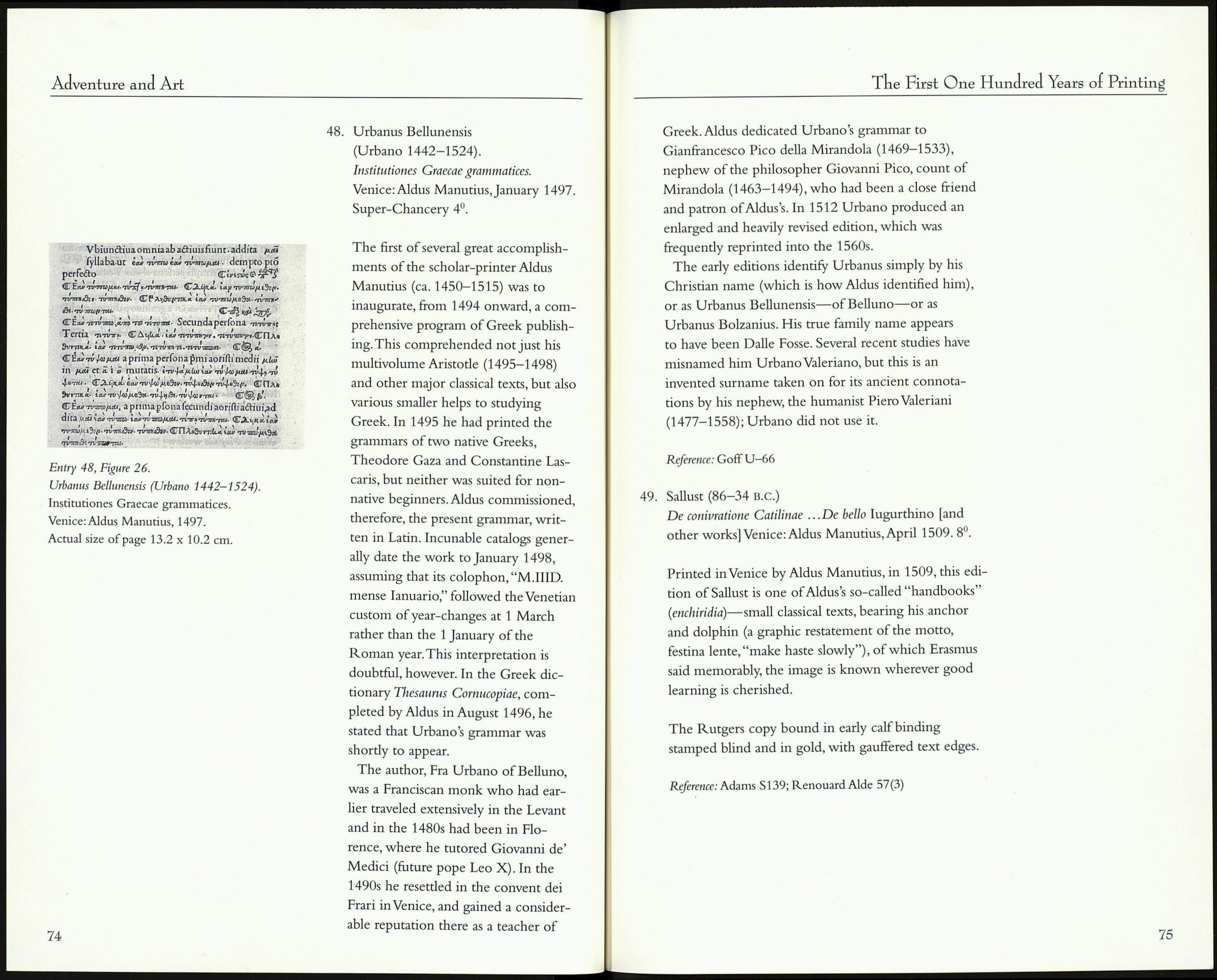 This, the third edition of Gower's Confessio amantis,
was printed in London by Thomas Berthelet in 1554;
originally published by William Caxton in 1483.
Berthelet, who reprinted Caxton's Confessio Amantis,
began publishing in about 1525, eventually replacing
Worde's frequent collaborator, Richard Pynson, as the
King's printer.

The Rutgers copy bound in panel-stamped calf with
gilt on board edges; it was acquired for the Libraries
through a library gift fund established by Charles H.
Brewer, '25, and Mrs. Brewer; 733181.

Aldo Manuzio—better known by the Latinized form
of his name, Aldus Manutius (1449 or 1450-1515)—
was the first great scholar-printer, whose engagement with
classical learning, close contact with learned communities,
and forceful business practices enabled him to bring into
print the unpublished cornerstone texts of Greek and
Roman literature—particularly Greek philosophy. Aldus
published the editio princeps of Hesiod (1495), Aristotle
(1495-1498), Aristophanes (1498), Sophocles (1502), Plato
(1513), and more than twenty other seminal authors of
antiquity. As Barbara A. Shailor has noted in this catalog,
if Aldus had not secured these texts in print, their survival
beyond the manuscript era would have been uncertain, and
Western literature would have lost some of its earliest
guiding lights.

Aldus figures prominently in the history of type design
as well. In collaboration with the ingenious goldsmith
and punch-cutter, Francesco Griffo of Bologna, he created
typefaces that largely determined the appearance of

sixteenth-century scholarly publication. His Roman,
designed in 1495, modernized Jensons prototypical
Roman (see #16). By reducing the size of Jensons epi-
graphic capitals, he brought them into greater harmony
with the minuscules. (Bembo, the typeface of this catalog,
is an early twentieth-century imitation of Aldus's Roman,
and named after Cardinal Pietro Bembo (1470-1547), the
author of the original fifteenth-century text in which it
appeared). Aldus's four Greek fonts, produced between
1495 and 1502, modeled upon the contemporary free-
flowing handwriting of Immanuel Rhusotas rather than
the ancient more formal hand beloved by early humanists,
are both praised as technologically innovative (Barker, 11),
and criticized for "want of legibility" (Davis, 14), for their
excessive use of ligatures. Finally the type designed by
Griffo upon the 'cancelleresca corsiva' of the Papal
Chancery (probably the hand of Bartolomeo Sanvito),
first printed as the face of a complete text in the Aldine
Vergil of (April) 1501, marks the entrance into the world
of what we know familiarly as italic. Highly regarded in
appearance—Erasmus esteemed italic to be "the neatest
types in the world," and economical—its slanting lines
allowed more letters to appear per page, and therefore
required less paper, italic became almost as popular as
Roman during the sixteenth century. As exhibited here
(see items #32, 49, 50, 51), the texts of small, scholarly
publications of the sixteenth century—or, rather, classical
texts for the nonscholarly ideal reader, who had the
education and leisure to read classical literature, but whose
reading matter was not wholly dictated by his profession—
appeared completely in italic, a practice that may seem
strange to those of us who are accustomed to seeing italic
used for emphasis or to set off words in a foreign language.