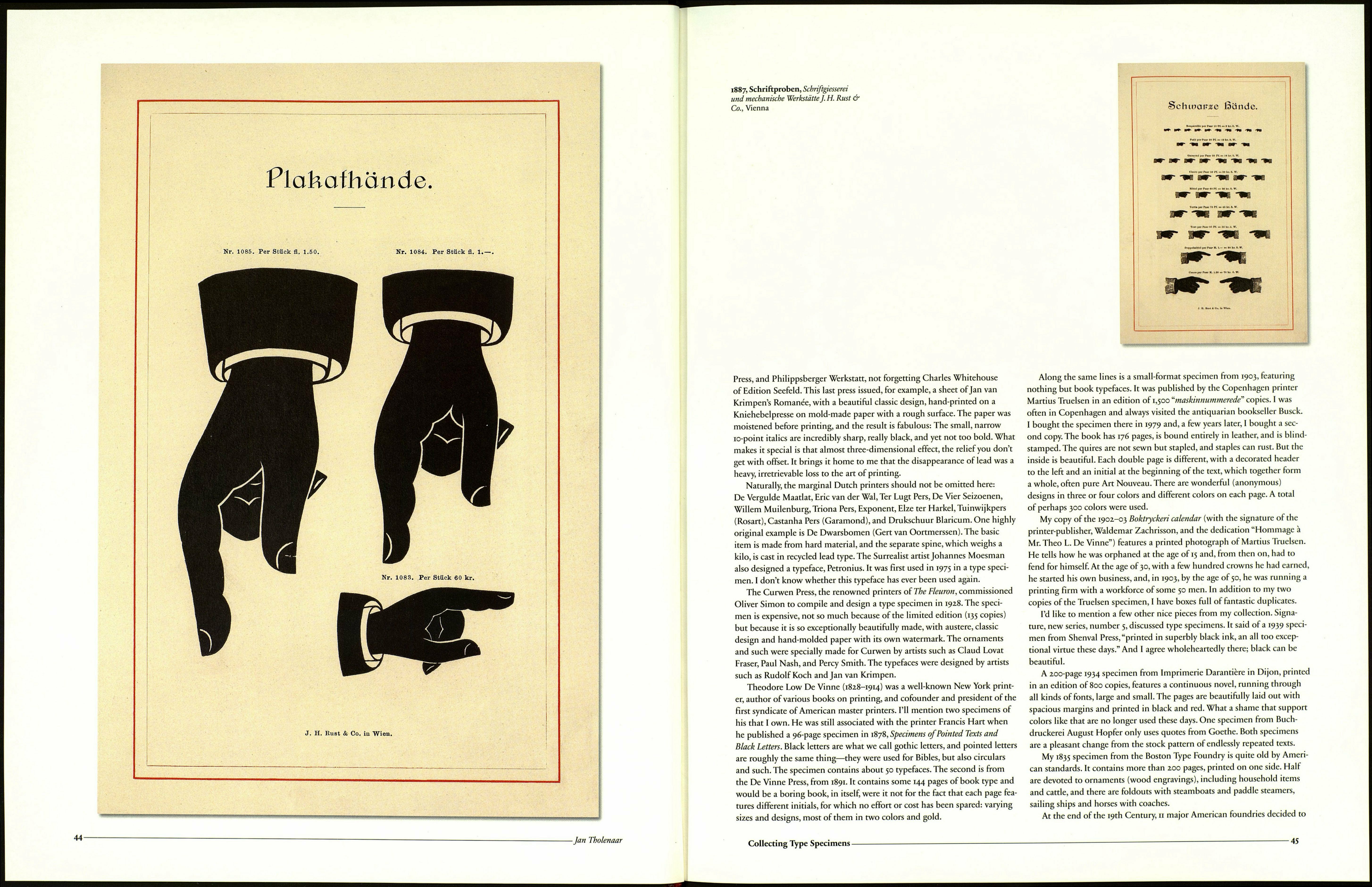 typeface Blizzard, from around 1938, expressly uses Heil Hitler to demon¬
strate the type.

Until the beginning of the 20th Century, the names of only a handful
of famous type designers, such as Garamond, Bodoni, and Fournier, were
known. The thousands of typefaces introduced by foundries in the 19th
Century were designed and engraved by anonymous workers. In type cata¬
logs, these are referred to as "im Hause" or " Hausschnitt." It was Klingspor,
in particular, who attracted and credited famous designers in the early 20th
Century: Otto Eckmann, Rudolf Koch, Walter Tiemann, Imre Reiner, and
so forth. Bauer engaged the services of Heinrich Wieynk, F. H. Ehmcke,
Lucian Bernhard, E. R. Weiss, Paul Renner (designer of the Futura type¬
face), and F. H. Ernst Schneidler, for example. Berthold employed designers
such as Louis Oppenheim, Georg Trump, and Herbert Bayer (of the Bau¬
haus). Important designers also worked for the Ludwig und Mayer type
foundry, including Heinrich Jost, J. Erbar, and J. V. Cissarz. Georg Belwe
and Jan Tschichold designed for Schelter & Giesecke, and E W. Kleukens
and Hermann Zapf for Stempel. Some designed type for more than one
firm. The specimens devoted to these designs are generally typographical
tours de force and little gems of the printing art.

It is indeed so that, for a large part of the 19th and 20th Centuries, the
Germans were trendsetters in this area. But in other countries, too, there
were excellent designers working for type foundries. Georges Auriol and
E. Grasset worked for Peignot, for example; A. M. Cassandre and Adrian
Frutiger for Deberny & Peignot; Roger Excoffon for Olive; Aldo Novarese
for Nebiolo; Warren Chappell and Morris E Benton for American Type
Founders; Rudolph Ruzicka, W. A. Dwiggins, and Walter Tracy for Lino¬
type; and F. W Goudy, Bruce Rogers, Berthold Wolpe, and Eric Gill for
Monotype. In the Netherlands, in the 20th Century, S. H. de Roos and
Dick Dooijes were employed by Lettergieterij Amsterdam, and J. van
Krimpen and S. L. Hartz worked for Enschedé.

I would like to mention a number of type specimens in my collection
that I consider unusual for one reason or another. I have a specimen dating
from 1832 from the F. Dresler und Rost-Fingerlin foundry in Frankfurt,
which was set up five years earlier, the successor to the i8th-Century
Schleussnersche Schriftgießerei. Later in the century, they were taken over
by Flinsch, which was swallowed up by Bauersche Gießerei.

The publications produced by Typis Sacrae Congregationis de Propa¬
ganda Fide in Rome, established in 1626 with the intention of spreading

the Christian faith among the peoples of the East, are an entirely different
kettle offish. These printers operated in the 17th and 18th centuries, and it
is with them that Bodoni learned his trade. They cut exotic letters for their

Around 1820, type foundries received fierce competition in
the form of lithography. While the book printers, with their rigid,
rectangular blocks of lead, were limited in their possibilities,
lithographic draftsmen could put any design onto a plate, as they
did for stocks and bonds, calligraphic visiting and business cards,
calendars, and other commercial printing work.

publications: Coptic, Tibetan, Persian, and so forth. Some of them were for¬
eign-language grammar textbooks with the Lord's Prayer in that language.
In 1798, the typefaces were transferred to Paris, where, in 1805, the Lord's
Prayer was published in 150 languages as the Pope's homage to Napoleon
on the occasion of his coronation. Many faces are still in the Imprimerie
Nationale. I have 14 of these publications, dated from 1629 to 1789.

Edmund Fry should also be mentioned in this context. His 1787
specimen includes Hebrew, Greek, Ethiopian, Samaritan, Arabic, Persian,
Turkish, Tartar, and Malay. In 1799, he published Pantographia, a work of
320 pages containing accurate representations with explanations of all
the known alphabets of the world. He cut most of the typefaces for this
publication himself.

The first major type specimen from the Schelter & Giesecke type
foundry, established in 1819, was published in 1836. In their 1894 commemo¬
rative book, I read that, in the early 19th Century, a good type caster could
cast 5,000 to 6,000 letters a day by hand! The number Friedrich Bauer men¬
tions in his Chronik der Schriftgießereien (1928) is 2,000 to 4,000. After the
invention of the casting machine in the mid-i9th Century, the speed
increased six-fold.

Proben aus der Schriftgiesserey der Andreäischen Buchhandlung, published
in 1834 in Frankfurt am Main, is also rare. On the title page, an announce¬
ment reads that, as of July 1,1839, the business has been taken over by Ben¬
jamin Krebs's Schriftgießerei, Buch-, Congrève- und Steindruckerei. And so
this foundry, started in 1581 by Johann Wechsel, moved forth into the 20th
Century.

From the same period is a specimen by Eduard Haenel (1837), from
shortly before his foundry in Magdeburg was destroyed by fire; he contin¬
ued his business in Berlin.

German foundries often had a branch in either Moscow or St. Peters¬
burg to serve the Russian market. I have a large broadsheet Berthold
specimen, produced toward the end of the 19th Century, entirely in Rus¬
sian, with extensive examples in many colors. Also from Berthold is a
Hebrew specimen from 1924—reading from back to front, naturally—
with various faces and wonderful color illustrations. In 1925, a similar
specimen was published in Eastern languages, including Arabic, Turkish,
and Hindi.

In 1990, another lead-set type specimen was published: A Miscellany of
Type. This broadsheet specimen is printed on 148 pages of heavy, mold-

made paper and is a bibliophilie publication (540 numbered copies) by the
English Whittington Press, printers and publishers of the fabulous Matrix
yearbook. A Miscellany of Type is an exemplary model of printing, with
wood engravings and other illustrations in color taken from other publica¬
tions by this press.

When I bought it, the book Ornamented Types, printed and published by
Ian Mortimer in London, was not to be found in any public collection in
the Netherlands. It contains impressions of decorated wooden pattern let¬
ters that came from the London typefounder Pouchée in the early 19th
Century. In 1936, the Monotype Corporation bought up this material from
the liquidated Caslon foundry. It survived the bombing during the war
and is now in the St. Bride Printing Library. It took years to print the 200
copies on an old hand press. The book consists of 24 alphabets—altogether
45 pages—printed on 170-gram Zerkall-Bütten (53 x 38 centimeters). The
whole thing comes in a slipcase, with an introduction by James Mosley.
This specimen is expensive, which is not surprising considering the
immense amount of work involved. It is worth every penny.

A specimen from the Gurajati Type Foundry in Bombay, established in
1900, contains more than 400 pages in many colors and was published in
a run of 10,000 copies. An article on this piece of work in Matrix 2 says that
they started it in 1926, and, as far as production and technical quality were
concerned, it was intended to "outdo" the Western foundries. An experi¬
enced printer and display setter were taken on and a new German press
was acquired; art printing paper was bought in America, and ink was pur¬
chased from Manders in England. The job was completed in 1937—a pro¬
duction time of 11 years, which is why I don't want to make too much of
an issue of that "outdoing."

There are also small specimens from private presses. I paid a lot of
money for one simple sheet: "Specimens of Type Used at The Ashendene
Press." What is special about it is that it includes two letters designed and
cut for Ashendene's owner, Mr. Hornby: Subiaco and Ptolemy. A specimen
by Hans Mardersteig for Monotype (1928) features Pastonchi, specially cut
for a new series of Italian classics. This appeared in a bibliophile edition of
200, hand-printed on Fabriano and with pasted-in models.

In this context, the type specimens of Paul Hayden Duensing (who cut
punches and founded type himself) are worth a mention, as are the Harris-
feldwegpresse, the Alembic Press, a really sweet little book from the Over-
brook Press (1934), the Harbor Press, the Kit-Cat Press, the Sandelswood